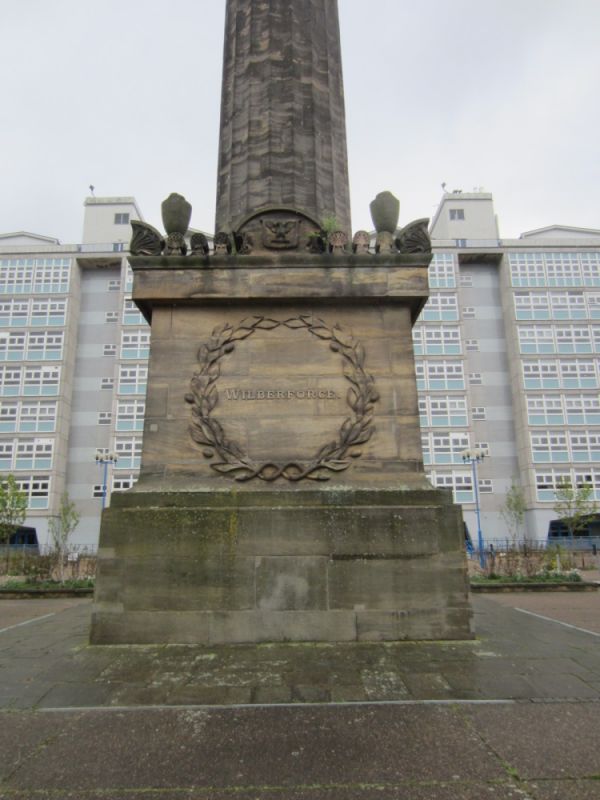 II
Commemorative monument, standing on the east side of Wilberforce Drive. 1834-8, by W. H. Clark of Leeds; the builders were Messrs Myers and Wilson. Moved here in 1935 from Queen Victoria Square. Ashlar. Massive fluted Doric column with square capital, carrying a corniced drum topped by a standing figure. Cubical pedestal with deep moulded plinth and plain cornice carrying on each side a segmental pediment flanked by acroteria with urns at the corners. The monument stands approximately 110 feet high.

HISTORY: William Wilberforce (1759-1833) was born into a prominent Hull family. Elected MP for Hull in 1780, and for Yorkshire in 1784, his political stance was independent from the first. In 1785 he experienced a conversion to evangelical Christianity, and resolved to devote his life to God. He was counselled by the evangelical minister, John Newton, and by his friend, Prime Minister William Pitt, that he could best serve God by remaining in politics. In 1787 he was persuaded by prominent abolitionists to represent their cause in Parliament. Whilst Thomas Clarkson and others gathered evidence against the slave trade and sought to mobilize public opinion, Wilberforce worked ceaselessly in Parliament, introducing bills calling for an end to the slave trade and speaking in their support; in 1788 he secured a select committee to examine evidence on the slave trade. The campaign met with fierce opposition and frequent set-backs before the abolition bill at last received royal assent on 25 March 1807. Slave ownership continued to exist in Britain's colonies, and Wilberforce continued to strive for the abolition of slavery itself, joining with others to form in 1807 the African Institution, and in 1823 the Anti-Slavery Society. He remained in the House of Commons until 1825, by which time Thomas Fowell Buxton had taken on the leadership of the parliamentary campaign. On 26 July 1833 Wilberforce heard that the bill for the emancipation of all slaves in British colonies had passed its final reading, and on 29 July he died. He was buried in Westminster Abbey, where a monument by Samuel Joseph was erected in 1840.

The town of Kingston upon Hull was quick to honour Wilberforce. Despite competition from a rival county scheme to commemorate the abolitionist with a school for the blind, voluntary subscriptions provided the funds for the spectacular monument. The foundation stone was laid on 1 August 1834, the day the Abolition Act came into force, and the statue was fixed in place on 12 November 1835.

REASONS FOR DESIGNATION
The Wilberforce Monument is designated at Grade II for the following principal reasons:
* A handsome and unusual monument, being an early use of the commemorative column in England
* The monument is of particular historical interest, having been erected to commemorate William Wilberforce, England's most celebrated abolitionist, in the town of his birth. This amendment is written in 2007, the bicentenary year of the 1807 Abolition Act.