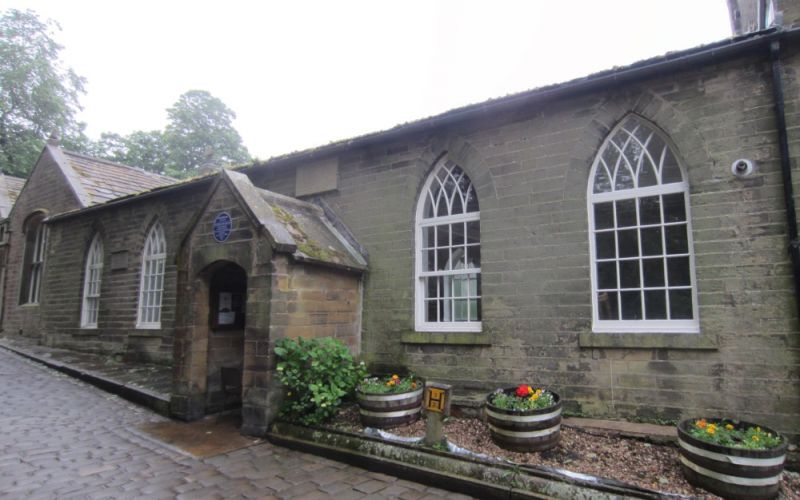 Church of England Parish: Haworth St Michael and All Angels

A former National School room of 1832 with 1851 and 1871 additions, associated with the Brontë family of Haworth.

MATERIALS: the building is constructed of coursed dressed stone with stone slate roofs in diminishing courses.

PLAN: the single-storey school building is aligned east-west on the north side of Church Street, between the church and the Brontë Parsonage museum. The earliest part is a rectangle with a porch to the south, and the two later C19 extensions are in the form of two matching blocks with gable ends facing north-south. It is attached to the east to the Sexton's house which is separately rented. There is a small enclosed courtyard to the rear. The base of a bellcote remains at the western end of the earlier part of the building.

EXTERIOR: the earlier part of the south elevation, to the right, has a projecting gabled porch with two pointed arch windows to the right and three to the left. The porch has a Tudor arch entrance with an external timber door and a half-glazed timber door within and a date plaque above. Between the second and third window is a stone plaque commemorating the restoration of the building in 1966. The windows have voussoirs and projecting cills, with mid-C20 glazing bars. To the left, are two gabled bays each with a mullioned and transomed window with hoodmoulds, and a central Tudor arched doorway with original timber double doors, also with hoodmould and projecting quoins. Above the door is a raised square pediment with a carved blank shield.

The left return (west side) has four mullioned and transomed windows with continuous hoodmoulds. The rear elevation has an entrance with a pointed arch windows above. One window is to the left of this and four to the right, all pointed arched similar to those at the front. To the right are the two gables of the later extensions, with windows as at the front, which extend forward of the earlier section. There is a small pent-roofed addition in the corner of the left gable, and a later flat roofed former entrance in the centre of the two gables with steps leading up to it, in non-matching stone.

INTERIOR: the interior of the earlier part is largely an open hall with a partitioned kitchen and office occupying one bay at the east end. It has an exposed roof structure of wooden queen strut trusses. The 1851 section is open to the main hall, but is raised up to form a deep stage with a wooden floor and lowered ceiling. A corridor runs from the main hall to the north side of the stage, giving access to toilets and an office which look out to the north. More toilets are located in the addition in the corner of the hall and stage; these are all plain, with modern fittings. The corridor turns to continue to the rear (west) of the stage, widening at the front (south), where it forms a lobby from the entrance between the two later sections of the building. The 1871 section is divided into a large classroom and a smaller office/store, both with lowered ceilings.

The first phase of the School Room at Haworth was built as a Sunday School in 1832. It was funded by the National Schools Society together with public subscriptions with the land donated by the Church Lands Trust, and the impetus for its establishment came from Patrick Brontë (father of the famous literary family) who was an advocate of the benefits of education for children. A memorial plaque over the porch with a date and including a quotation from Proverbs was written by Patrick Brontë. All of the Brontë children are said to have taught at the school.

In 1843 he applied for a further grant from the National Society to enable the school to open on weekdays and employ a master who was also the curate. This was Arthur Bell Nicholls, the future husband of Charlotte Brontë. An extension to the school was built in 1851 and in 1854 it hosted the wedding celebration of Charlotte to Nicholls. A second extension was built in 1871 in matching style.

The building ceased to be a school in 1903, and was subsequently used for various purposes including a gymnasium, library, army billet and youth hostel. It underwent restoration in 1966 and is currently in community use.

The Old School Room, Haworth is designated at Grade II for the following principal reasons:
* Architectural Interest: the building is a good example of a school of the period, and the later additions are sympathetic in both materials and style;
* Date: the first phase of the school is relatively early and the development of the school can be read in the later phases;
* Historic Associations: the association of the school with the Brontë family is clear, with its inception by Patrick Brontë , the involvement of all his children in teaching there and the marriage of Charlotte Brontë to Arthur Bell Nicholls, the first master of the school;
* Group value: the building stands between the Grade I Parsonage and the Grade II* parish church, at the core of the C19 village of Haworth.