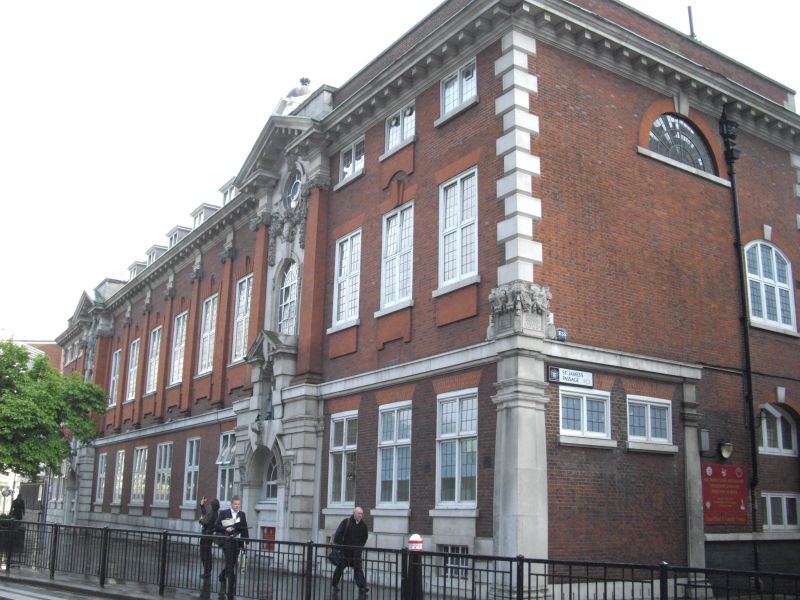 INTERIOR: north-east facing block contains room (now the Committee Room) on ground floor containing re-used late 17th century panelling brought from a demolished house at 32 Botolph Lane: these 33 panels are painted with Chinoiserie scenes dated 1696 and signed by P. Robinson, and are the earliest known paintings of this genre in the country; this room also has a re-used 17th century plaster ceiling, and a bolection-moulded fireplace surround with Delft tiles. At top of stairs, affixed to a stone plinth, is a fine lead statue of Sir John Cass by Roubiliac, taken from the front of the earlier school building. The assembley hall is lined with pilasters, with foundation stones; a fine c.1780 fireplace surround with a relief of a sleeping Cupid and slips of Brocatello marble; a Renaissance revival war memorial; panelling up to the dado; arch-headed double doors. The classrooms occupy the other wing, and are entered off corridors, with internal glazing set within arched and shouldered frames; staircases are tiled up to dado level.

SUBSIDIARY FEATURES: railings to playgrounds on each side of building.
HISTORY: Sir John Cass MP (1661-1718) left a bequest towards providing schooling for the poor of the Ward of Portsoken in 1710. An inscription plaque in the assembly hall reads that Cass endowed this school 'for ye education of ye poor children born in this Ward, that they might be early instructed in ye true Religion according to ye Principles and Practice of ye Church of England'. The painted room was brought from a house (dem.1905) formerly used by a school subsumed within the Sir John Cass Foundation School in 1905. The school is a fine example of the 'Wrennaissance' style and contains elements of outstanding interest.