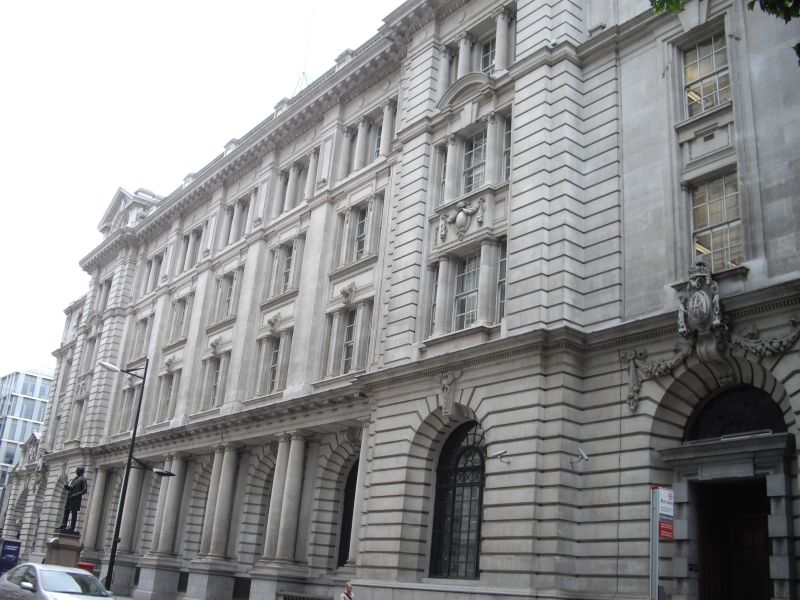 Post Office. 1907-11 by Sir Henry Tanner of Office of Works, principal assistant
(Sir) Richard Allison. Free classical building with east front and north and south returns of Portland stone on a granite plinth. Front of four main storeys with attic mainly recessed behind balustrade and cornices at first and third floors. Elevation is nine bays in width, with flanking open arches north and south bearing royal arms. The ground storey throughout is arched and rusticated, with coupled Doric columns on high bases in the five-bay centre. In the end bays are entrances to the post office through straight-headed doors with Gibbs surrounds within the arches; above these, at third-floor level, are round windows with further blocked surrounds. The second and seventh bays project slightly, have rusticated quoins, and are carried up into pedimented features at fourth-floor level. The rear elevation is roughcast and mainly non-load-bearing, with round-headed windows on the ground storey. The whole of the structure of the building is in reinforced concrete on the Hennebique system as Licensed to L. G. Mouchel and Partners, and is contemporary in date and structure with the sorting office behind Nos 106-l13 Newgate Street (q.v.), to which it is attached by a high-level bridge. Interior of main post office consists of long office three bays deep and seven bays wide interrupted by two rows of six reinforced concrete piers, clad in veined marbles and supporting concrete beams cased in plaster. The ceiling is divided by the beams into panels and richly ornamented, with swags and corbels at the heads of the columns in lieu of capitals. The windows on the long sides are lugged and have prominent keystones. The building is important in the development of reinforced concrete architecture in Britain.
See also: Nos 106-113 Newgate Street with which this building forms a group.