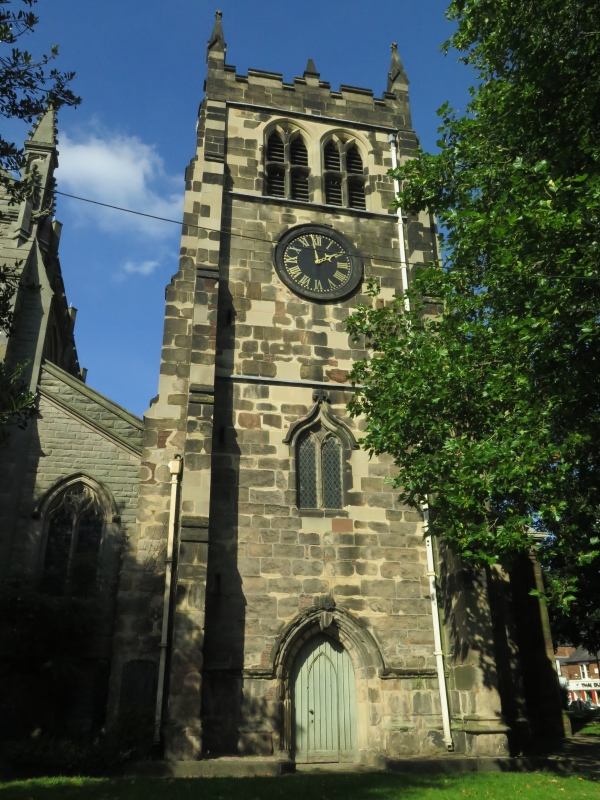 PLAN: South tower with chancel, to which Blomfield's aisled nave and chancel, with transept and porch on liturgical north sides, were added on a north-south axis.
EXTERIOR: The 3-stage tower is in Gothic-survival style, with angle buttresses, embattled parapet and corner pinnacles. It has a west doorway with continuous moulding, and ogee-headed 2-light west window. In the middle stage are clock faces in circular stone frames. The bell stage has pairs of 2-light openings with Y-tracery and transoms. On the north-east side of the tower is the former chancel in classical style, which has angle pilasters and is hipped at the east end. It has keyed round-headed north and south windows, and east wall with blind keyed oculus. The chancel north aisle, the roof of which is concealed behind a plain parapet, has round-headed north window and a panelled east door in a moulded architrave, above which is a hood on consoles and a lunette. Blomfield's church is in free Perpendicular style and is oriented north-south, with the chancel at the north end. (This description uses the liturgical orientation.) It has plain parapets to the aisles and embattled parapet to the clerestorey, with pinnacles rising from the buttresses. The 5-bay nave has 3-light clerestorey windows and 3-light square-headed aisle windows with rich tracery. There is a shallow 'north' porch which has chamfered angles, an offset square-headed doorway with traceried overlight and adjacent 2-light window. The impressive 'west' front has main and subsidiary pinnacles rising from angle buttresses, and statue niche with pinnacle below the apex. The large 7-light window has rich tracery, and is above a shallow gabled `west¿ porch. The porch, with open arcaded balustrade, and pinnacled shafts rising from diagonal buttresses, has a doorway with continuous moulding under a crocketed ogee head. The 3-bay chancel has two 2-light and one 3-light 'south' windows. Its triple 'east' window, beneath a super arch, has 3-light window flanked by 2-light windows, all of them blind below transoms that are set at an unusually low level. Angle buttresses are carried above the eaves and have square, blind-panelled turrets. The 'south' chapel has 3-light windows similar to the aisles. The 'north' organ chamber has a pair of 2-light transomed windows, between which an attached shaft rises from a buttress to a statue niche in the parapet.

INTERIOR: The old chancel has a 2-bay north arcade of 1850, with coffered arches on an unfluted column, said to have been modelled on the 1699 nave arcades. The chancel plaster ceiling is on a deep coving with rich cornice incorporating egg-and-dart, and has a ceiling rose. Walls are plastered, with pilasters in north and south sanctuary walls. Arches into the late C19 nave have been blocked. The decorative floor tiles were installed in 1873 by W.B. Simpson & Sons, with raised wood floors below choir stalls. In the tower, the base of which was converted to a vestry, with fireplace, is a parquet floor. In Blomfield's church, the nave has arcades of quatrefoil-section piers and moulded arches. Blomfield's chancel arch is on corbelled shafts. The nave has a hammerbeam roof with intermediate trusses, boarded behind. The chancel has a wagon roof divided into panels by moulded ribs. It has a 2-bay arcade into the south chapel and arch to the organ chamber. The east wall is lavishly treated, with rere arches, richly carved spandrels, and a band of ogee-headed arches above the reredos. The mosaic and tile reredos includes a representation of the Eucharist flanked by Old Testament figures. In the south wall are piscina, sedilia and aumbry under rich tracery.

PRINCIPAL FIXTURES: In the old chancel is a reredos of 1708 by Thomas Trimmer, with Commandments, Creed and Lord's Prayer, crowned by a plaster Royal Arms. Choir stalls added in 1873, possibly designed by H.I. Stevens, were made by Mr Chapman of Norwich, and incorporate a screen between chancel and aisle with fretwork decoration that is probably earlier. There are many wall tablets, notably to Sarah Winyates (d 1828) by Sir Francis Chantrey, dated 1832, a neo-classical monument with female mourner, done at a cost of £600. Two 1870s chancel windows have been attributed to Mayer of Munich. Other chancel fittings were moved from the nave after closure. The font is late C19, but the wrought-iron cover is by Robert Bakewell (1716), with new chain and bracket made in 1896. The wrought-iron pulpit and former chancel screen were designed by Blomfield in 1896, in homage to Bakewell, the renowned ironsmith. In Blomfield's church 2 surviving choir benches of 1873 have poppy heads and backs with quatrefoil frieze. The east window is by Kempe, as are 3 south-aisle windows and one north-aisle window.

SUBSIDIARY FEATURES: Attached to the north wall (i.e. liturgical east) of the C19 chancel is an early C18 gate screen by Benjamin or William Yates.

HISTORY: A church of medieval origin, but the earliest surviving part is the tower, rebuilt in 1601 after the collapse of the medieval tower. It is in an unusual position at the south-east corner of the former nave. The remainder of the church was rebuilt in 1699 after serious flood damage, but of that period only the chancel has survived, which has a north aisle added in 1850 by H.I. Stevens (1806-73), architect of Derby who is otherwise better known for his Gothic churches. The remainder was rebuilt, with a new chancel, on a north-south axis in 1892-94 at a cost of £15,000 by Sir Arthur Blomfield (1829-99), one of the most successful C19 church architects who had been awarded the RIBA Royal Gold Medal in 1891. The ambitious scale of Blomfield's church was unrealistic in the long term and the church closed in 1984, when some of the windows, by Kempe and Herbert William Bryans, were moved to Turnditch All Saints. Blomfield's church was converted to a shopping arcade in 1989-90 then, after a period of further disuse, as a Chinese restaurant, but was disused again in 2009. The tower and earlier chancel is retained as a chapel by the Churches Conservation Trust. Dr Samuel Johnson (1709-84) was married here in 1735.

REASONS FOR DESIGNATION: The Church of St Werburgh, Friar Gate, Derby, is designated at Grade II* for the following principal reasons:
* The tower is a rare example of Gothic-survival architecture, from a period when there was comparatively little new church building.
It has a well-preserved late C17 chancel in the classical style.
* Blomfield's church is a confident Gothic-Revival design, especially notable for its bold exterior.
* Fittings of special note include a reredos of 1708, wrought-iron font cover of 1716 by Robert Bakewell, and high-quality C19 choir stalls, iron screen and pulpit in the old chancel, and reredos in the 1894 chancel.
* An early C18 gate screen is attached to the north wall of the church.