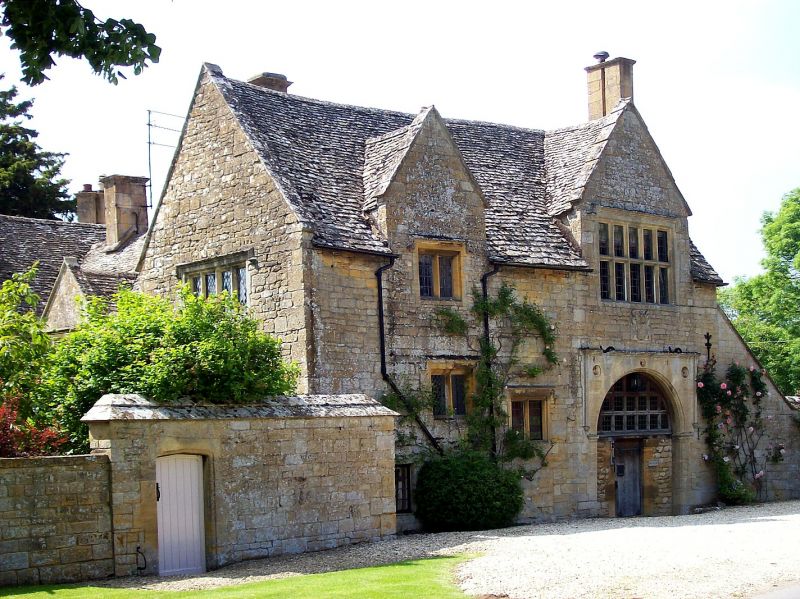 SP 03 NE BROADWAY CP SNOWSHILL ROAD
4/132 The Court
30.7.59
GV II*
Gatehouse, now house. Circa 1600, restored and extended 1898 by Guy Dawber.
Limestone rubble with stone slate roof. Two storeys. Windows are rebated
and chamfered with mullions. Earliest part, facing road, has two windows of
two lights on the ground floor, and a similar one towards the left on the
first floor partly within a gable. At the right is a 5-light window with
transom within a gable. Below is a wide entrance with a moulded segmental
arch within a square label, and moulded imposts. Carved below the label
are three crests: a reindeer, a sheldrake and a mailed fist. Above is a
carved coat of arms of Sheldon crossed with Rudding. The archway is now
blocked and contains a smaller doorway, with leaded glazing within a grid
of timber mullions and transoms above. Gables coped. Chimney to right
has paired shafts. The south facade has a two-bay recessed centre between
two gabled wings, each of one bay, the right-hand one part of the original
gatehouse. In the right-hand bay of the centre is a chamfered doorway.
The early part of the house once formed the gatehouse and entrance to the
stables of Broadway Court, which stood in the field opposite until its
demolition in 1773. (Houghton, C C: A Walk About Broadway, 1980; VCH, p 36).