A Grade I Listed Building in Broadway, Worcestershire 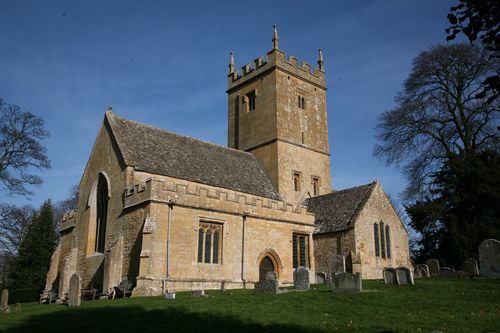 Church. Circa 1400, with remains of late C12 and later. Restored 1866.
Limestone ashlar and rubble with stone slate roof. Comprises a nave,
north and south aisles, north and south transepts, crossing tower and
chancel.

INTERIOR: five-bay nave arcades have round piers and responds
and slightly pointed arches. The western arches are of two square orders and
the eastern one on the south side is similar. The others are chamfered in
two orders. All have scalloped capitals except for the western responds and
the eastern pier on the north side which have moulded capitals. The nave
roof has arch-braced rafters and two plain tie beams. The arches of the
crossing tower are pointed and chamfered in two orders. The western wall of
the tower of c1400, slightly overlaps the first bay of the nave arcade.
On the east side of each transept arch is a C12 respond remaining from the
former east bay of the nave arcade, now occupied by the tower. Each has a
capital added in C15. The chancel contains a moulded trefoiled piscina. In
the south transept is another trefoiled piscina. Wall monuments include one
in the chancel to Walter Savage, died 1640, with strapwork, Corinthian columns,
angels heads, and a shield of arms. Against the east wall of the south transept
is a monument of marble and slate to William Taylor, died 1745, by S Chandler.
It has composite columns and a segmental pediment. The turned communion rails
are of c1700. Attached to the north wall of the chancel is a wooden panel with
carved tracery and eight ogee arches containing figures. The choir benches,
transept screens and pulpit incorporate some medieval woodwork including blind
tracery carving. Close to the pulpit is a turned oak alms box of c1700. The
font has a tapering bowl. Close to the north doorway is the hexagonal stem
of another font, with slender engaged shafts.