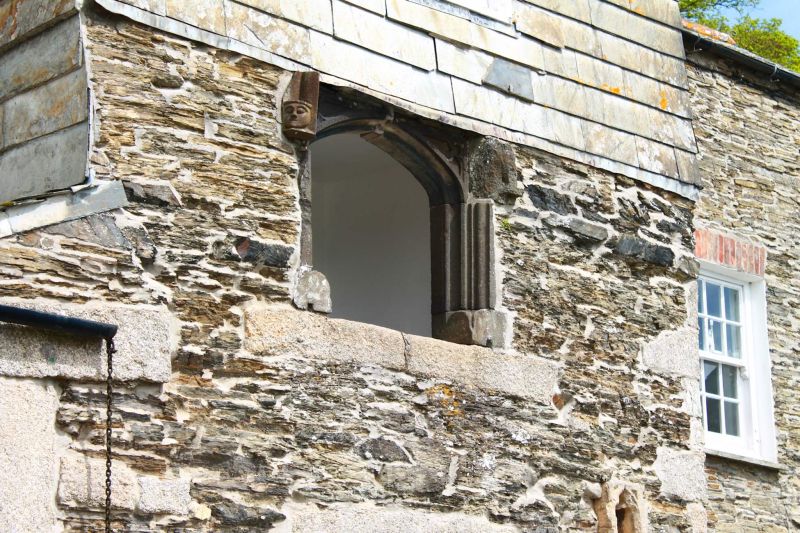 House and railings to front. Circa late C15, possibly with earlier origins, extended
and remodelled in C18 and probably C19. Slate stone rubble with upper part of front
wing timber framed and hung with rag slates. Scantle slate roof with hipped end to
front wing and gable end to left and to rear right. Brick axial and end stacks and
probably the remains of a truncated projecting front lateral stack on front left.
Plan: Interior not available for inspection at time of survey (1987) therefore the
original plan and development is uncertain. Information from a survey of the
building in the early 1980s suggests that the house has an irregular overall
courtyard plan with circa C15 front range wing to rear right probably C18 returning
with a circa C19 parallel service wing to rear, built into a steep slope. Shallow
possibly C18 wing to rear left, partly encloses fourth side of courtyard. The front
range is possibly the truncated remains of a first floor hall built over a full width
unheated basement of 2-room plan. The shallow wing to front, in the form of a 3-
storey porch has a basement entrance, straight flight stair to entrance to ground
floor on left and integral newel stair in right hand corner containing internal stair
between basement and ground floor with window bay above lighting first floor. The
hall was probably originally open to the roof and the existing first floor inserted
in the late C16 or early C17. Probably coeval with the flooring, the hall was divided
into 2 rooms, the right hand room heated by an axial stack in the approximately
central inserted cross wall and the left hand room by a front lateral stack which has
been truncated. The hall appears to have originally extended further to the left.
The wing to rear right was probably built as a parlour wing or servants quarters in
circa C18 and contains a complete pantry. Circa C19 service wing to rear of 2-
storeys, built into the steeply sloping bank.
Exterior: 2 storeys and basement with shallow central wing in the form of a 3-storey
porch. Truncated projecting front lateral stack to far left, the house probably
originally extending further to the left. Central wing with chamfered granite door
frame with pyramid stops to basement and cusped single light window lighting internal
newel stair to right. Probably reset Catacleuse stone moulded 4-centred arch with
carved spandrels and hood mould with carved heads to label stops above and C19 20-
pane sash lighting first floor. To left a straight flight of steps leads up to the
central entrance with C19 horizontal sliding sash and blocked window visible from
interior with splayed jambs. To right, plank door to basement with horned 20-pane
sash above. 3 window right hand side elevation with C19 16-pane sashes.
Interior: C18 and C19 joinery intact including C18 2-panel doors and china cupboard.
The structural timbers to the front range are probably C16 and earlier, the first
floor probably inserted in the late C16 or early C17 retaining probably original
rebated floor boards, a particularly unusual survival. Resited C17 door to rear left
hand ground floor room. Granite newel stair.
High quality roof structure survivng in front wing, the principals with curved feet
and braces, resting on a moulded wall plate. Section of moulded rib hanging from
apex in form similar to that of a waggon roof. In the main range the principals
appear to have curved feet and there is at least one jointed-cruck truss. The
principals are morticed at the apices with morticed collars and threaded purlins.
As interior access was not available for inspection at time of survey (1987) it is
important that a full survey be made before alterations are made. There are probably
further interesting features and those already recorded are of a particularly high
quality.
Source: Notes and drawings by Eric Berry in early 1980s, Sites and Monuments
Register, Truro.