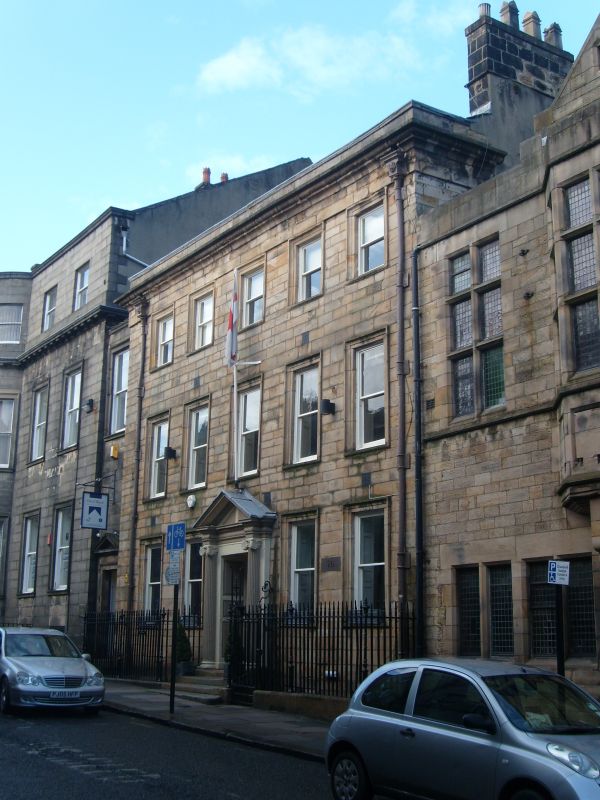 House, now club house. Early C18 with 1637 rear wing, and some
early C19 alterations and additions. Sandstone ashlar with
ashlar dressings to front facade with roughly coursed rubble
elsewhere. Slate roof with gable chimney stacks. 2 rectangular
blocks parallel to the street and linked by a passage on the
right-hand side.
The front block has 3 storeys above a cellar, which is at
ground level at the rear, and 5 bays with a prominent eaves
cornice with a blocking course. To either side the lead
rainwater hoppers have a lion mask. All the windows have
moulded architraves and are sashed without glazing bars; those
on the second floor are shorter. The slightly projecting
doorway, up 4 steps, has engaged fluted Ionic columns carrying
an entablature with a pulvinated frieze, which breaks back
between the columns, and a dentilled pediment. The reveals of
the doorway have panels whose pattern - tall, short, tall -
does not match the pattern of the door itself, which has 2
rows of 4 narrow panels below an integral overlight whose
glazing bars form a pattern based on a hollow-sided diamond.
The area to the left is blocked; to the right the area has
tall cast-iron railings with stick balusters topped with
spikes and standards in the form of bobbin balusters with urn
finials. To the right of the doorway, on the return of the
railings, are scrolled wrought-iron cresting and the remains
of a tall lantern bracket; attached to the wall inside the
railings is a torch-snuffer.
The C17 rear block, of 4 storeys with a continuous flat-topped
parapet, is dominated by an early C19 two-storey bow, offset
to the left. This has a flat-roofed porch at ground level,
providing the deck to French windows on the first floor (which
is on the same level as the ground floor of the front block).
To the left of the bow on the ground floor is a 2-light
mullioned window; to the right there are a blocked 3-light
window with recessed chamfered mullions and 2 chamfered
doorways, the one to the far right with a moulded lintel.
Above the left-hand window on the second floor is a
diamond-shaped datestone with raised letters: 'T R M 1637'.
INTERIOR has very extensive panelling, mostly of early C18
type, with raised and fielded panels above and below a dado
rail: that in the principal ground-floor room, or hall, and
the saloon above it has fluted Corinthian pilasters; that in
the right-hand ground-floor room, or parlour, in the spinal
corridors on both floors, and in the ground-floor dining room
of the rear block has fluted Tuscan pilasters; the room above
the dining room in the rear block has a fully-panelled closet
with built-in cupboards and drawers underneath them. In the
bar behind the hall in the front block there is C17 muntin and
rail panelling. The main staircase, on the right of the front
block, is doglegged and has an open string, elaborately carved
brackets and moulded trimmings to the steps and risers, 3
fluted balusters per tread, fluted rectangular newels and a
ramped handrail; at the first half-landing it has a
round-headed stair window with the original thick glazing
bars, while at the second half-landing it has a chamfered
stone cross-window. A doglegged staircase in the rear block
has a 2-light mullioned stair window and may have splat
balusters under modern boarding.
The basement of the rear block contains a stone fireplace
approx 2m wide, with chamfered jambs and a massive moulded
lintel. In the passage there are 2 blocked 2-light mullioned
windows.
HISTORY: the deeds are said to show that Oliver Marton senior
bought the property in 1723 from Edmond Cole. After his death
in 1744 it passed to his eldest son Edward Marton MP, who died
in 1758 and was succeeded by his brother, the Reverend Oliver
Marton. There is a tradition that this is the house, occupied
by a Mrs Livesey, in which Bonnie Prince Charlie stayed from
24th to 26th November 1745 on his way south.