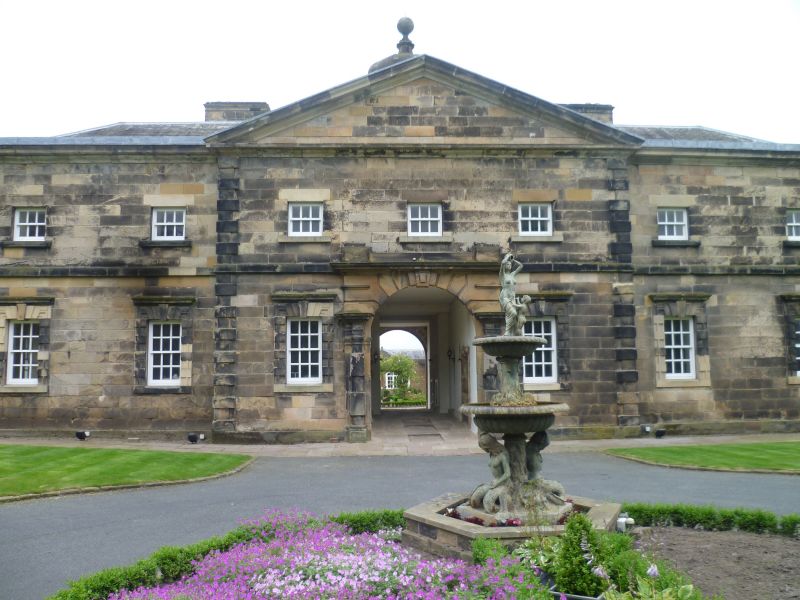 Wing of former country house, now derelict. c.1730. By Giacomo
Leoni; with additions to rear c.1862 by Mr Wyatt.
Sandstone ashlar, slate roof (formerly hipped).
Rectangular double-depth plan on north-south axis, facing
east, with a central through-passage; and various outbuildings
arranged around a double courtyard to the rear. Palladian
style.
Two storeys, 2:3:2 bays, the centre pedimented and breaking
forwards slightly; with a plinth, banded quoins, 1st-floor
band, and a moulded cornice with blocking course.
The centre has a large round-headed archway with an architrave
including banded semicolumns, run-out voussoirs, a panelled
keystone and a cornice with blocking course, and damaged
wooden gates. The ground floor has tall windows with Gibbs
surrounds and cornices (all now boarded), and the 1st floor
has small square windows with raised sills but otherwise plain
surrounds.
Rising from the centre of the roof is an octagonal cupola with
an oeil-de-boeuf in each side (some with remains of wooden
louvres), a moulded cornice and an ogival stone cap with a
large ball finial surmounted by a weathervane; and to each
side is a chimney stack.
The 4-bay north return side (which is now propped with timber
buttresses) has a doorway near each corner with triple
keystone and pedimented Gibbs surround, 2 windows between
these with triple keystones and Gibbs surrounds, and at 1st
floor 4 small windows like those at the front. The rear
elevation is similar but simpler. The attached stable yard
ranges are single-storey stables, coach-houses, etc, very much
dilapidated at time of survey (1991).
INTERIOR: very badly dilapidated at time of survey, the floors
and roof of the northern portion collapsed, but the southern
portion has remains of the plank panelling of former horse
stalls.
Forms group with remains of garden wall attached to north-east
corner (q.v.) and with ha-ha bounding south and east sides of
former garden (q.v.).