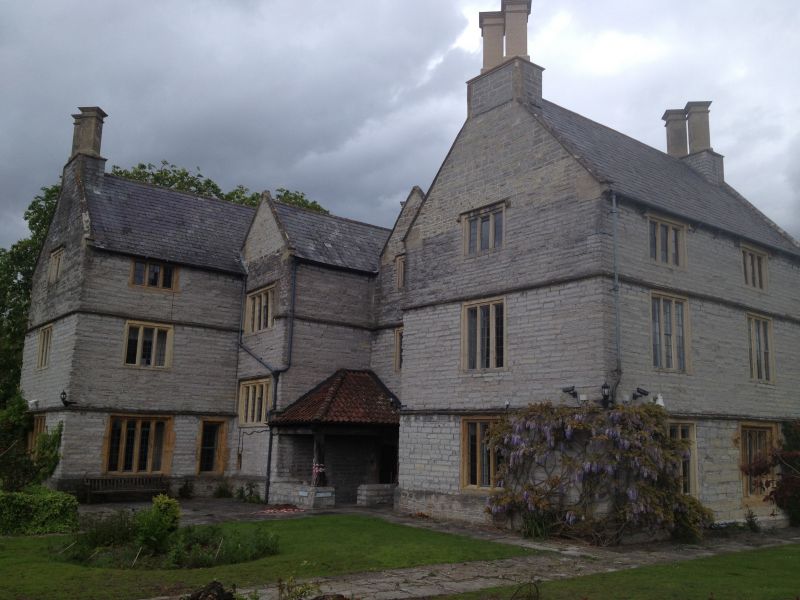 Manor house. Early/mid C16 to left return wall and projection,
refronted and rebuilt after 1613. Blue lias roughly coursed
limestone rubble, Ham Hill stone dressings, C19 Welsh slate
roof with carved kneelers to moulded coping; stone stacks to
diagonally-set ashlar flues.
L-plan with stair projection at angle with rear right service
wing: front (north) block has left gable-end stack and porch
to left of large external lateral stack heating hall: rear
block has gable-end stacks.
2 storeys and attic; north front is 5-window range. Moulded
string courses and stone-mullioned ovolo-moulded 4-light
windows to ground floor and 3 lights above; similar 2-light
mid C19 ground-floor window to right of the 3-storey porch
which has a moulded architrave to a hollow-chamfered
basket-arched doorway with the arms of the Perceval and Cave
on the foliate spandrels; reset C16 round-arched inner door
with lozenge stops to the label mould and mid C19 cornice and
foliate boss inside the porch. To the right of the porch is a
large external lateral stack.
The right return, left gable end and rear are in similar style
with similar windows, a Tudor-arched doorway with sunk
spandrels adjoins a stair turret; to ground-floor rear is a
reset early/mid C16 three-light window with 4-centred arch
heads, roll-moulded mullions and casement-moulded architrave
with lozenge stops to the label mould.
A projection to the left return of 3 storeys has similar
early/mid C16 two-light windows, one to the first floor with a
dragon and a dog to the label stops; a similar 4-light
first-floor window above a restored chamfered 3-light window
with a label mould to the left return which has chamfered
square-headed window, C16 lancet above with sunk spandrels to
a 4-centred arch, two C19 inserted larger lancets to rear and
C16 quatrefoil light to the attic; early C20 one-storey
extension to the front.
INTERIOR: heavily remodelled late C19/early C20 with panelled
walls and doors. Earlier features include the following. The
former hall to the front has a herring-bone tile fireback and
ovolo-moulded architrave to a 4-centred arch with sunk
spandrels, now painted and with C19 overmantel. A passage from
rear door of hall (opposite the porch) to rear room, has 2
chamfered 4-centred arched doorways to kitchen on left with a
chamfered beam. The rear room has a similar fire surround with
'primitive' caryatids to the overmantel. The restored early
C17 plaster ceiling has lozenge and quatrefoil panels with
thistles, rosettes, fleur-de-lys and moulded cornicing; some
reset C17 panelling.
The early C17 closed-string, dogleg stair has a moulded
handrail, pyramidal caps and pendants to heavy turned newels:
restored and rebuilt in 1928 with chestnut wood, only the
heavy turned balusters are of the original oak.
To the first floor is a C17 hollow-chamfered 4-centred arched
doorway and a stop-chamfered arched wooden door frame with C17
planked door to the wing on the left. Fireplace to room above
kitchen has a Tudor arch to a moulded surround with foliate
spandrels and a late C19 enriched cornice. A small room to the
right has an ovolo-moulded fireplace. No.access to the room to
rear. The second floor has a chamfered-arched doorframe to
right. Roof trusses not available for inspection but probably
of collar-truss type.
History: The original building of c1500 was built for Thomas
Percival. A late C16 oak lantern finial from the old staircase
is in the Blake Museum (qv). A remarkably centralised plan
form for the early C17, the stair turret being placed at the
angle with the rear wing.
(Ward-Jackson C H: An Account of Sydenham Manor House and some
of its former owners: ICI Sydenham Manor: 1986-).