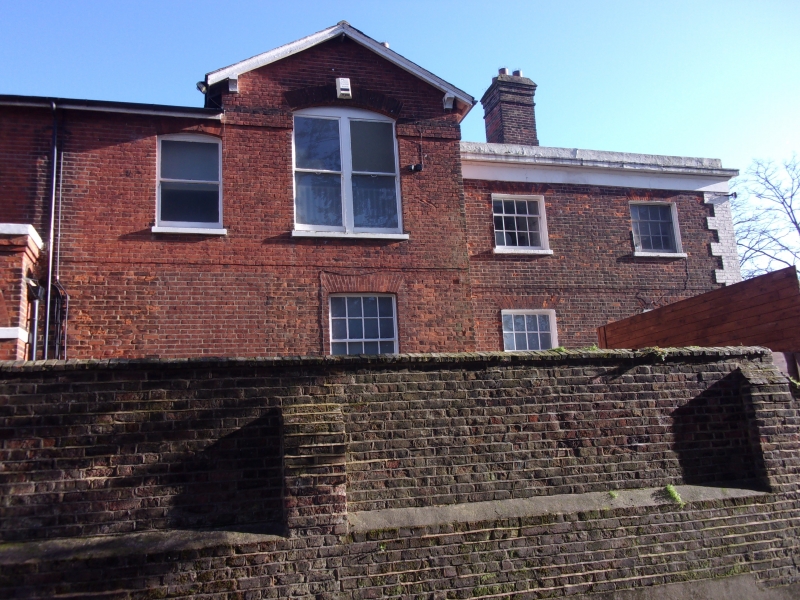 Police station, now public library. Designed 1844, completed
1851, extended in later C19, converted to library c1932. Red
brick in Flemish bond with dressings of gault brick and
stucco, roofed with slate. Square plan with central stack,
entrance porch to east. Large C19 extension to north. Smaller
single-storey extensions to north and south of porch. A small
single-storey building north-east of the original police
station, originally freestanding, of the same date or soon
afterwards, is now connected with the north extension.
EXTERIOR: 2 storeys. The west elevation (to Library Road) has
on the ground floor 2 original sashes of 8+8 lights, with
painted reveals, flat brick arches, and some handmade glass,
and on the first floor 2 original sashes of 8+4 lights,
otherwise similar, symmetrically arranged. Projecting quoins
of gault brick. Plain frieze, simple moulded cornice and plain
parapet, stuccoed. Pyramidal roof.
The south elevation (to Queen's Road) has on each floor a
central sash similar to those in the west elevation, and on
the ground floor a later sash of 6+6 lights; similar quoin and
eaves details. On the east elevation the lower storey is
mainly covered by the porch and extensions to each side of it,
except the south-east quoin above the extension. Door of 2
beaded flush panels and 2 glazed panels with chamfered brick
jambs, chamfered shallow segmental arch of gault brick, and
one original limestone step. The porch has a plain frieze,
simple cornice and parapet of stucco, and a flat roof. To the
south of it a small extension is keyed in, and some of the
original quoin bricks reused to form a similar south-east
return; simple stucco cornice and parapet and flat roof.
INTERIOR: to the north of the original windows retain internal
shutters of double sash type, on both storeys; these are rare
survivals, seldom if ever found in domestic buildings except
on the ground floor, meriting special care. Original dogleg
stair with closed string, turned pine newels, stick balusters
and moulded pine handrail.
HISTORICAL NOTE: Essex was the first English county to form a
police force under the County Police Act of 1839. This site
was acquired by the Justices of the Peace on 27 February 1840
from John Duncan, and was then described as bounded to the
south by the Queen's Road, to the west by Well Lane (now
Library Road) and to the north by Back Road (now Coptfield
Road). The agreement with the builder, Thomas Hill, is dated
23 March 1844, and includes a site plan and south and west
elevations. A second porch is shown to the north-west, similar
to the other, and a single-storey wing extending north. Part
of this former porch is incorporated in the brickwork of the
present north extension. The police station was opened in
1851; no reason is known for the delay in completing
construction. Listed particularly for its historic interest as
one of the earliest police stations in England which can be
positively identified.