A Grade I Listed Building in Newark-on-Trent, Nottinghamshire 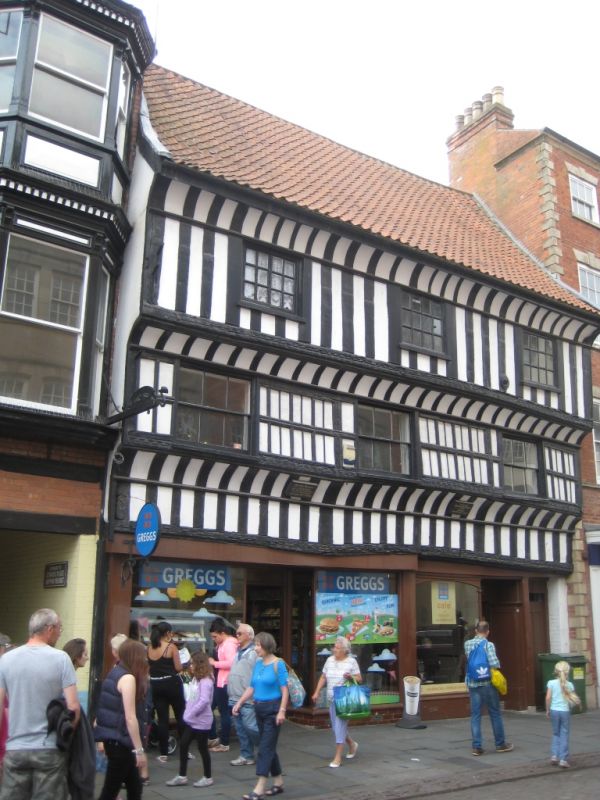 Find accommodation in
Newark upon Trent

Also known as: Harvest Bakery & Cafe.
House, now bakery and cafe. 1474, with late C18 addition and
early and late C19 and C20 alterations. Restored and converted
1987 by Guy St John Taylor Associates. Timber framed, with
coursed rubble and brick underbuild and rendered nogging, and
colourwashed brick, with pantile roof. Close studded front has
coved jettied floors with billeted bressummers, coved eaves
and coped gables. Single external rear wall and gable stacks.
3 storeys, 6 bays. L-plan. 3 large early C19 glazing bar
sashes and above, a 2-light glazing bar casement to left, and
2 glazing bar fixed lights to right. Below, 2 late C20 wooden
shopfronts, that to left with central recess and a pair of
glazed doors, flanked by single pane windows. That to right
has a segment headed single pane window and an angled recess
with a glazed door. Door and window have leaded overlights. To
right again, a close boarded entry door. East side has close
studding and a glazed-in open gallery with wooden mullions,
flanked by single 3-light windows. Above, two 2-light
casements and a smaller single casement. At the rear, to west,
the 2 upper stages of a jettied turret with moulded bressummer
and decorated gable. Small glazing bar sash and above, a
hatch. Rear wing has a coved jettied second floor. Single
glazing bar sash and single Yorkshire sash, and above, 2
Yorkshire sashes with 4 and 2 lights. Below, a beaded 6-panel
door with overlight, flanked to left by a large glazing bar
sash. 2 storey C18 addition, to south, has a C20 metal
casement and below, a segment headed door. Interior retains
almost complete framing, with stud walls and arch braces on
the first floor, several of them with wall painting. Similar
second floor has plain stud walls. Principal rafter roof with
single butt purlins, struts and wind braces. Ground floor has
plain span beams, some renewed, one of them with a
figure-carved stone bracket. First floor has chamfered span
beams and in the rear wing an exposed ceiling with moulded
joists, and a cambered span beam. Central ground floor
fireplace with moulded cambered bressummer and jambs. On the
first floor, a similar fireplace bressummer. Partly renewed
winder stairs have on the first floor a C15 garderobe. 2 doors
made of wall panelling. This building is an important example
of timber framing, wihich was predominant in Newark before
c1660. It was the headquarters of the town governor during the
sieges of 1643 and 1646.
(Buildings of England: N Pevsner, revised E Williamson:
Nottinghamshire: Harmondsworth: 1979-: 196).