Cathedral Church of the Blessed Virgin Mary and St Chad

A Grade I Listed Building in Lichfield, Staffordshire 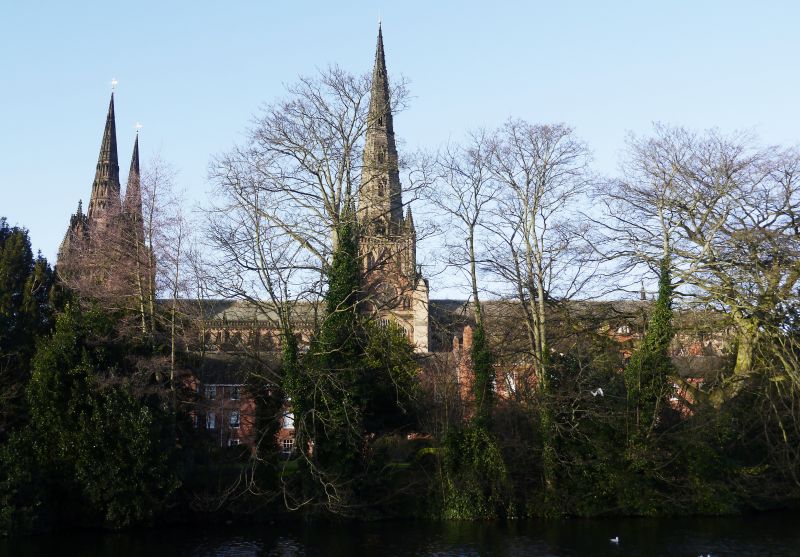 EXTERIOR: Lady Chapel has three-bay apse articulated by plinth, stepped to end due to slope of ground, gabled buttresses with C19 statues, enriched cornice with traceried and embattled parapet with pinnacles; three-light windows, six-light central windows to north and south, with trefoil tracery; three much restored tomb recesses to south with cusped arches, gables and pinnacles.

INTERIOR: Lady Chapel has tierceron vault with ridge rib and bosses, wall shafts with 1895 canopied statues by C E Kempe; applied arcade of nodding ogee arches with buttresses and pinnacles, wall passage has traceried and brattished parapet. Choir has similar clerestory with quatrefoils to reveals; west arcades with stiff-leaf capitals and 1860 canopied statues by J B Philip, east arcades with Decorated foliage capitals and applied cinquefoils; aisles with applied arcading, to west of four trefoil-headed arches per bay, to east of six cusped arches per bay.

One of England's smaller cathedrals, much damaged during the Civil War, but retaining much of interest, and very good C19 work.