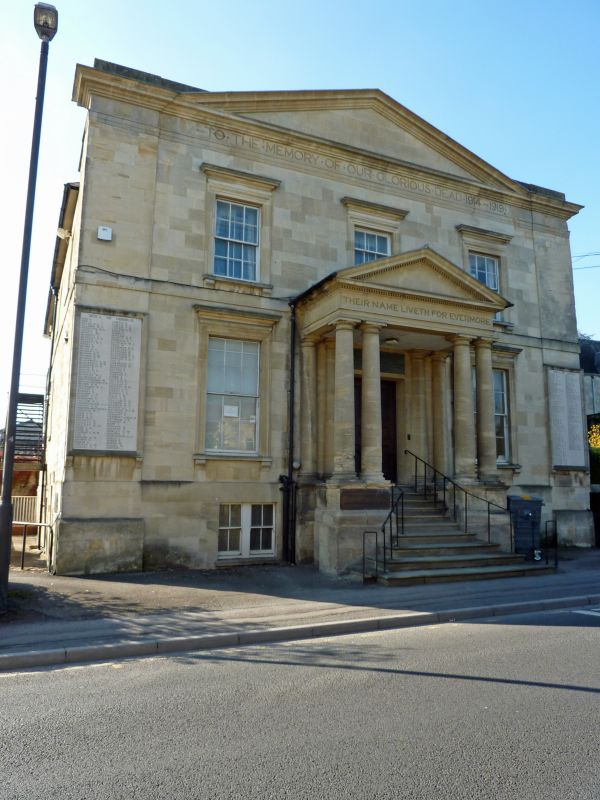 Limestone ashlar to front, coursed squared limestone to sides. Welsh slate roof, gable facing; one reconstituted stone stack on right slope. Front is two storeys and half-basement; three-window range. First floor has two 6/6-pane sashes in moulded stone architraves with pulvinated frieze and cornice, stone cill on brackets; to centre 3/3-pane horned sash in similar architrave, shortened because of position over porch. Ground floor has two 6/6-pane sashes similar to first floor in similar architraves; to centre Doric porch with pair of columns to each side raised on high plinth; ten steps up to pair of doors of three panels each. Deep plinth has to each side of porch pair of 2/2-pane sashes with horns with timber mullion in plain reveal with stone cill lighting basement. Band course over ground floor. Broad flat pilasters to each side; moulded stone cornice with broad shallow pediment to centre; blocking course. Frieze has incised lettering TO THE MEMORY OF OUR GLORIOUS DEAD 1914-1919; incised lettering on frieze of porch THEIR NAME LIVETH FOR EVERMORE. Tablets on pilasters to each side with incised Roll of Honour have moulded stone architrave and are supported on simple brackets. Metal plate over doors within porch inscribed THIS HALL WAS GIVEN BY EARL BATHURST AND/ WAS ALTERED TO ITS PRESENT PURPOSE BY/ SUBSCRIPTION FROM THE EARL AND COUNTESS AND THE INHABITANTS OF THE TOWN AND DISTRICT/ AS A THANK OFFERING FOR THE VICTORY WON/ AND FOR PEACE.

Side elevations have C19 and C20 sashes. Two small C19 single-storey extensions and C20 lift tower in reconstituted stone to rear and right side. Curved ramp to right side gives access to ground floor from pavement.

INTERIOR inspected on ground floor only; presents entirely C20 appearance and said to be similar on other floors.