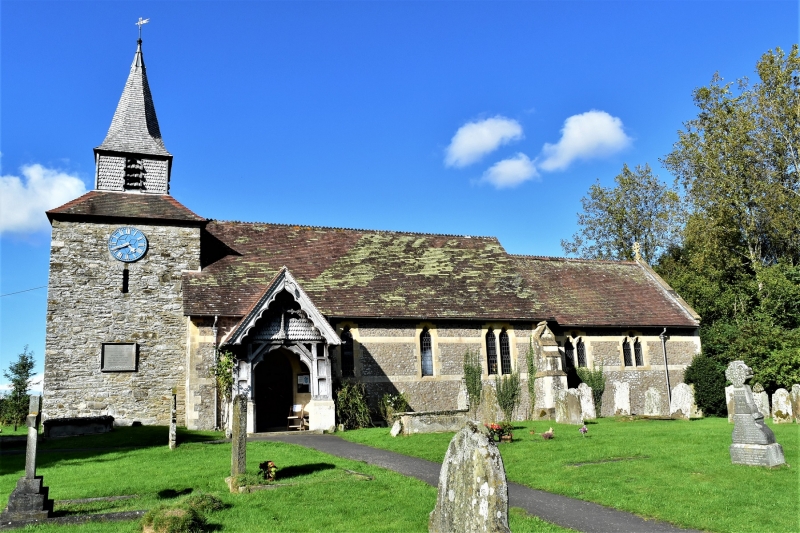 Parish church. Possibly C16, re-built, apart from west tower, in 1890-1 by
H Curzon. Sandstone rubble with limestone dressings. Timber-framed porch.
Tiled and shingled roofs. West tower, four-bay nave, two-bay chancel and
south porch. Tower is possibly C16 with late C19 roof and bell-stage.
Rubble lower part has single central loop set high up on each side except
the east. Clock faces on west and south sides above loops. Tablet on
south wall to four men of parish who fell in The Great War. West window
has a pair of chamfered late C19 lancets. C19 roof is hipped to bell
chamber which has shingled sides, central louvred bell-opening to each side
and shingled broach spire. North elevation of nave has three windows, a pair
of trefoil-headed lights to the left and right and a single trefoiled-headed
light to the left of centre. Weathered buttress to right of centre. Dressed
quoins and two flush dressed stone bands, one at cill, the other at springing
level of window heads. At the left side is a buttress incorporating a stack
rising to a tiled gablet with an octagonal stone shaft. Cresting to roof.
Chancel has a pair of 2-light trefoil- headed windows with trefoiled tracery
to both north and south sides. East window has three lights. The outer two
are trefoil-headed. The arch is two-centred with a plain label. Eastern
verge with gable cross. Cresting to roof. South elevation of nave has a
pair of trefoil-headed lights to the right and two single trefoil-headed lights,
one to the centre and one to left. Weathered buttress to extreme right has
dressed quoins and gable with recessed trefoil. South porch is oak and
timber-framed on stone plinth. Scalloped bargeboard. Ogeed angle struts
to collar. Shingled gable front with cross. Returns have two rows of panels,
the top rows partly open. The roof is single framed and tiled. South door-
way has moulded two-centred head with label running into a string confined
by the porch. Interior has wagon roof to nave with one cambered and chamfered
tie-beam, perhaps C17. Chancel roof has trussed rafters with curly V-struts
from collar. Chancel has a trefoil-headed piscina. On the north wall is a
square headed aumbry and a stone tablet for John Downes, died 1687, with
scrolled margins, putto-head, segmental pediment and achievement. Communion
table, probably C17, within a later table. Harmonium is late C19 by Bell
Piano & Organ Co Limited, Guelph, Ontario, Canada, with "mouse proof" pedals.
Chancel arch is two-centred with label running into strings. Nave has heavily
constructed oak pews, probably C18 with moulded backs and ends. Upper parts
of walls have plank posts and rails producing a timber-framed effect. C13 font
has octagonal bowl and stem. Circa 1900 brass ewer in form of tapered cylinder
with hinged lid and large spout. (BoE, p 233; RCHM, Vol III, p 136).