A Grade II* Listed Building in Bisham, Windsor and Maidenhead 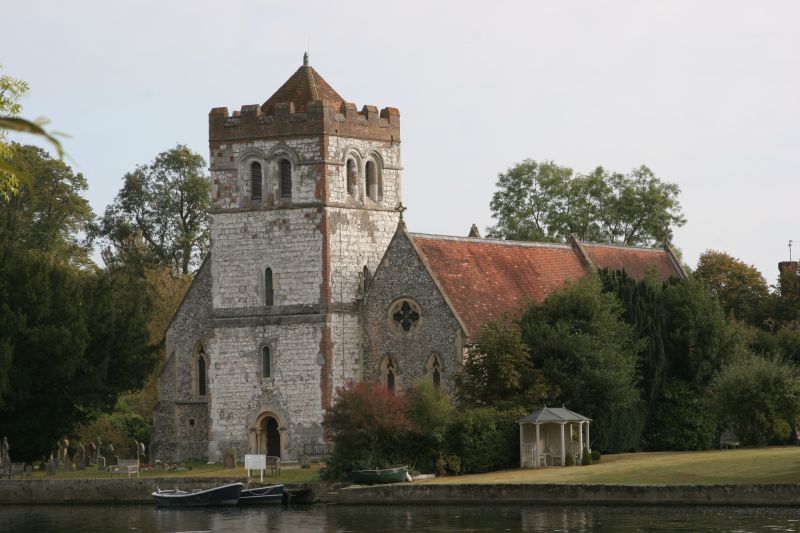 Parish church. Dates from mid C12, of which only the tower remains. Restored by
Benjamin Ferrey 1849. North aisle and chancel extended eastwards 1877. Minor
restorations to tower in 1903 and 1905. Part chalk with stone dressings, part flint
with stone dressings. Tile gabled roofs, separate over nave and aisles. 3-bay nave,
aisled; with west tower, south porch, chancel and south chapel. Tower: 3 stages
divided by chamfered string courses. The bottom stage projects in front of the walls
above. The west wall has a C19 doorway, and above this a small C12 round-headed
window, with widely splayed inner jambs, but restored externally. There is a similar
window at the same level on the north wall, but unrestored with chamfered orders.
The ringing stage is lighted from the north, south and west by single C19 pointed
lights. The bell chamber has original coupled round-headed lights on all 4 sides, with
crudely carved chevron ornament, and labels formed by a string course running round
the walls at the arch springing level. Above this is a brick, embattled parapet, and
a pyramidal tile roof. The remaining parts of the church have a projecting plinth,
moulded cill string course and 2-stage buttresses. All windows are C19, except the
late C16 'Hoby' window in the east wall of the south chapel. Nave: north aisle:
6 bays, 3 buttresses, and one diagonal buttress at each end. On the left end bay a
lancet, in the second bay a 3-light window with flowing tracery in a pedimented projection
dated 1878 with a stone cross on apex, and relieving arch near ground level, with inscription
above 'Vault of the Williams Family of Temple House, Berkshire'. 3 bays to the right
of this have a 2-light cusped, traceried window, and the end bay a 2-light similar window
with a C19 door and pointed arch under. Nave, south aisle: 5 bays, 4 buttresses and
one diagonal buttress at each end. On left end bay a small C19 pointed arched doorway;
a gabled entrance porch in the second bay. One lancet in bay to right of porch, and
one 2-light cusped traceried window in the next bay. A sundial at high level in the second
bay from the right end. Nave and aisle and south chapel, east end: 3 gables, one bay
each, with stone crosses at apex, the centre chancel projecting with a 3-light window
with reticulated tracery. A similar window on the north aisle and on the south aisle,
the 'Hoby' window of 6-lights with 3-centred heads; above which is a C19 trefoiled
window. Interior: Nave with C19 arch braced collar roof. 4 bay north and south
aisles with similar roofs. 2 bay, C19 arcades in the style of the C14, open into the
north aisle and south chapel. Both nave arcades are 3 bays, the north similar to that
of the chancel. Semicircular tower arch of 2 moulded orders. In the east wall of
the south chapel is the early C17 Hoby window of 6-lights with 2 shields in each,
and an inscription showing that it was put up in 1609 in memory of Sir Philip and Sir
Thomas Hoby. Monuments: A fine C16 monument against the south wall of the chapel,
erected by Dame Elizabeth Hoby, in memory of her brothers, comprising an alabaster
altar tomb, built into the wall in an arched recess, with the recumbent figures of the
2 brothers; small Doric pilasters support an entablature and divide each end of the
tomb into 2 bays and the front into 3. On the right of this, a C16 coloured marble monument
to the memory of Elizabath Lady Hoby. In the centre, under a canopy formed by an
entablature supported at either end of Corinthian columns, and inclosing a semicircular
arched recess, are the kneeling figures of Lady Hoby and her children; the whole stands >
upon a panelled plinth. In the centre of the chapel, is a marble monument to Margaret
Cary, wife of Sir Edward Hoby, in 3 stages, the lower 2 forming a base from which rises
an obelisk between 4 swans. In the north east corner of the north chancel aisle is an
early C16 tomb of Purbeck marble, to the memory of Mrs. Wheatley, daughter of Mr. Thomas
Williams, of Temple House, Berks. d.1850.