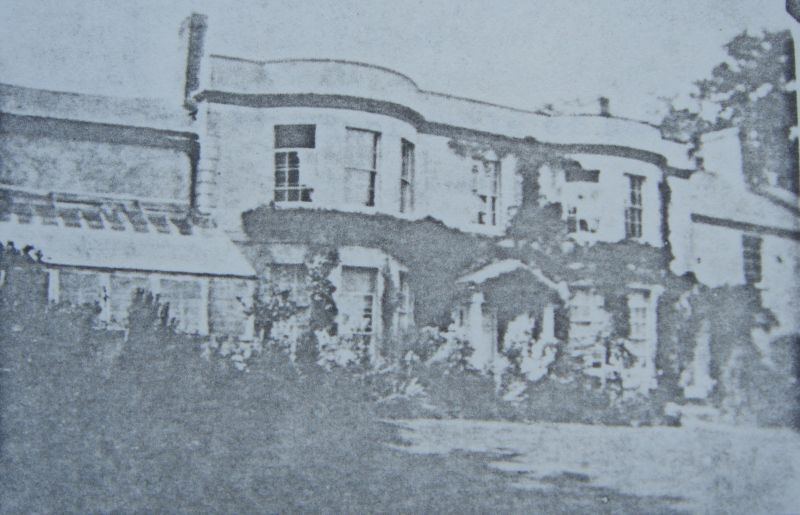 Large house, former manor house. Of core, much rebuilt in the C18-early C19, then
modernised and enlarged in the late C19. Plastered stone rubble, maybe with brick;
stone rubble or brick stacks with brick chimneyshafts; slate roof.
Plan and development: large house built down a gentle slope facing east-south-east,
say east. The main rooms are in the centre which has a 2-room plan, one either side
of the entrance hall and main stair. These rooms have outer axial stacks backing
onto the rooms either side. In the late C19 the entrance hall and right main room
were. To right (north) is the long dining room with a small unheated service room
beyond. A service corridor on both floors runs along the back behind the dining
room and main rooms. To rear of the main rooms a service block under twin parallel
roofs project at right angles. The left (southern) room here is the kitchen and has
a large gable-end stack. The main block continues left (south) of the main rooms
with a further 2 rooms. There is one C17 window in the main block. Otherwise it
seems all the main block was built in the late C18-early C19 and although it seems
likely that the left (south) end was also built at that time it seems to have been
radically altered in the late C19 and C20. The kitchen is probably C17. House is 2
storeys throughout.
Exterior: the central section of the main block breaks forward slightly from the
rest and it has stucco quoins, a plat band at first floor level, a bracketted eaves
cornice and plain parapet. It has an attractive and symmetrical 3:1:3 window front.
The 3-window sections are in full height projecting curving bays and have tall
original sash windows, 15-pane (6/9) sashes on the ground floor and 12-pane sashes
on the first floor. Between these bays is the front doorway in an elliptical arch
which contains the original 6-panel door flanked by side lights and under a fanlight
containing an ornate radial pattern of glazing bars. The gabled Doric porch in
front has been partly rebuilt in the C20. Above it is another 12-pane sash. The 4
window section to right contains mostly original 16-pane sashes and also contains a
secondary 6-panel door with overlight panelled reveals and timber doorcase. The 5-
window section to left contains mostly C20 replacement sashes although a couple of
the ground floor ones are probably C19. The main block roof is continuous and
hipped each end. The rear includes a variety of C19 casements and 16-pane sashes
and at first floor level towards the north end of the main block there is a C17 oak
4-light window with ovolo-moulded mullions.
Interior contains a good deal of C19 joinery and other detail, the best found in the
main rooms. C19 stair is open string with shaped stair brackets, square newel posts
and spat balusters. Open arcade of Doric posts into the right room which has a
marble chimneypiece. The only evidence of C17 work is from the kitchen where there
is a large stone fireplace with a soffit-chamfered and step-stopped oak lintel. The
massive oven and copper boiler alongside are C19. The axial ceiling beams have
double-ovolo mouldings and although they are C17 they may be reset. Roof not
inspected.