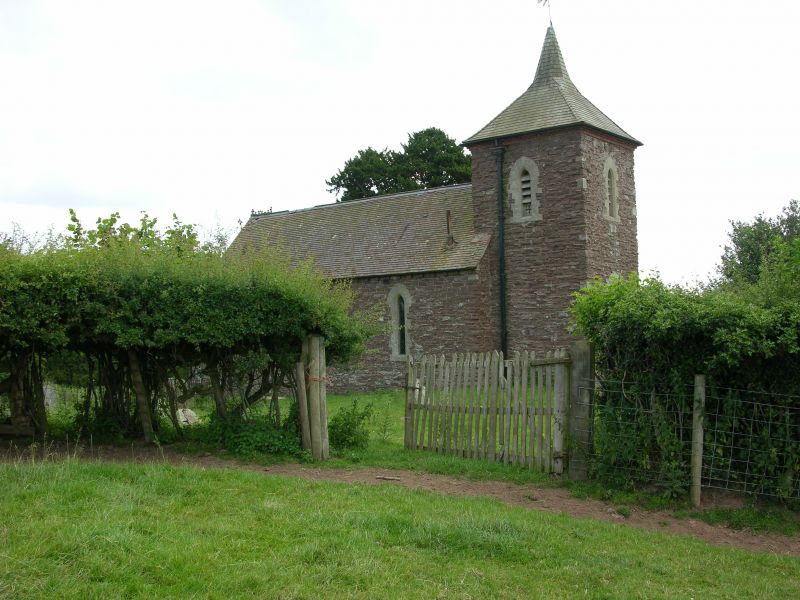 Church of England Parish: Bredenbury with Greendon Bishop and Wacton

EXTERIOR: The church is in Gothic-revival style under a steeply pitched roof. The nave has simple pointed windows, 3 in the south wall and 2 on the north. The pointed south doorway has a continuous chamfer, within a pretty timber-framed porch on a dwarf wall. It has open arcaded sides and gable with quatrefoils. The chancel south wall has a 2-light window with central column, and trefoil plate tracery. The apse has single cusped windows under hood moulds, and a sill band. In the 2-stage tower is a 2-light plate-tracery west window. A Norman window has been re-set in the south wall. Bell openings are pointed and on the west side a date tablet is below the sill. The low, splay-foot shingled spire is on sawtooth brick eaves.

INTERIOR: The tower arch, and arch into the sanctuary apse, both have continuous chamfers. There is no break between nave and chancel, which is a unified space with a trussed-rafter roof on moulded cornice. In the apse is a ribbed wooden vault. Walls are plastered and windows have simple chamfered rere arches that die into the imposts. The nave has a flagstone floor with wood floor below the pews. Decorative tiles in the chancel include encaustic tiles.

PRINCIPAL FIXTURES: The round tub font is probably C18. Other fixtures are mainly of 1870, including the pine pews and choirs stalls which have open shaped ends. The C20 pulpit has blind Gothic panels. There are several simple wall monuments. The memorial to Philip South (d 1756) has pilasters, open pediment and urn, by James Yates. Others include two by W. Milton for Captain Joseph Nunn (d 1813) and Philip Morris (d 1816), and two by Philpott of Bromyard to James Parlour (d 1757) and John Jenks (d 1806).

HISTORY: The church is of C12 origin, evidence for which is the re-set south tower window. A tablet inside the church records the rebuilding of the church in 1787-88. The apse was added in 1870, when the interior of the church was also Victorianised, by F.R. Kempson (1837/8-1923). Kempson's architectural practice was based in Hereford and he received many church commissions in Herefordshire.

REASONS FOR DESIGNATION:
The church of St John the Baptist, Grendon Bishop, is listed Grade II for the following principal reasons:
* It is an early Gothic-revival church, which retains external character despite later extension, incorporating earlier phases.
* The interior retains C19 character and detail.