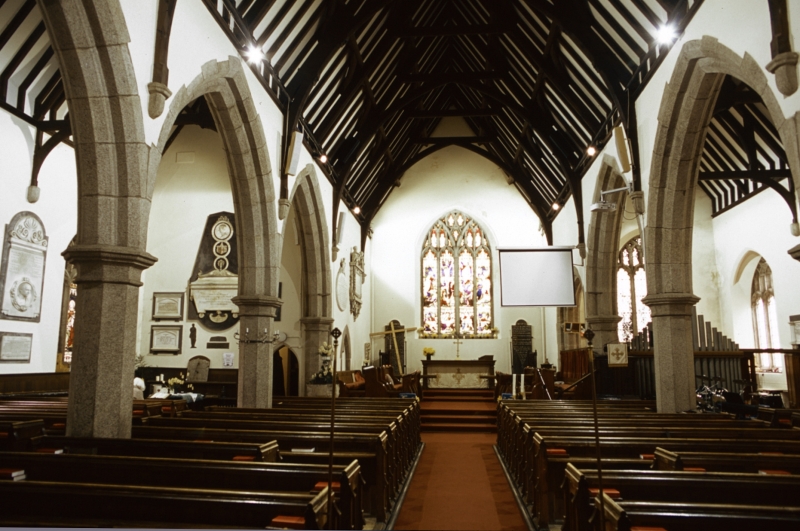 ILLOGAN CHURCH ROAD
SW 64 SE
(west side)
10/181
Churchtown
Church of St Illogan
GV
II
Church. 1846, by J.P.St Aubyn, replacing former Church of St Illogan (of which
only the tower remains, q.v.); altered. Killas rubble brought to courses, with
granite dressings, slate roof. Gothic style. Nave with north and south aisles of
equal height, short chancel. The 6-bay aisles have buttresses and angle buttresses
with 2 offsets, gabled porches to the 2nd bay with moulded 2-centred arched
doorways and coped gables, and the south porch has a sundial over the doorway;
the other bays have 2-centred arched 3-light windows with cusped lights and
Perpendicular tracery in the heads, and the ends have similar windows with
hoodmoulds. The west end of the nave has an added west window, projecting
slightly, with 5 cinquefoil lights, and lettering on the sill commemorating
Gustavus Lambart Basset of Tehidy (d.1889). The chancel has diagonal buttresses
and a traceried 4-light east window with a hoodmould. All the gables have raised
coping with apex crosses. Interior: 5-bay aisle arcades of double-chamfered 2-
centred arches on octagonal piers with moulded caps (west end now partitioned
by glazed screen wall in 2nd bay to make 2-storey meeting room); nave has
arch-braced collar truss roof, aisles have arch-braced crown post roofs; chancel
has 4-centred arch to organ chamber on south side; attached to south aisle wall
(and now within upper meeting room), a painted copy of the letter of Charles I
to the County of Cornwall. Numerous wall monuments removed from former
church, including, in the north aisle: a set of small brasses to James Basset and
his wife (1603); a white marble sarcophagus with medallion portrait, Francis
Basset (d.1769); a bust in a medallion, by Richard Westmacott, commemorating
Francis Lord de Dunstanville (d.1835); a marble relief depicting the weeping wife
and children of John Basset (d.1843); a young woman feeding the poor, Frances
Baroness Basset (d.1855); a standing angel reading, John Francis Basset (d.1869);
and in the chancel: an oval tablet with Latin inscription, John Basset Collins; and
a very elaborate cartouche with open pediment and putti, Mary, wife of John
Collins and daughter of Francis Basset of Tehidy (d.1743)