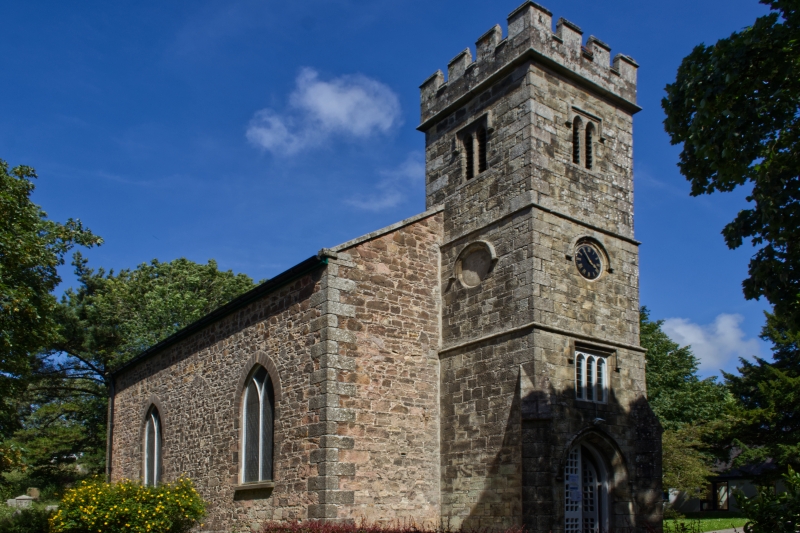 CARN BREA CHURCH ROAD
SW 64 SE
(east side)
5/145 Pool
Trevenson Church
II
Church. Built 1806-9 by the Basset family of Tehidy as a chapel of ease to the
Church of St Illogan, Illogan (q.v.); tower added subsequently; slightly altered.
Uncoursed killas rubble with granite quoins, compostion slate roof; tower of
snecked granite. Nave, small chancel, west tower partly embraced by nave.
Gothick style. The narrow 3-stage tower has angle buttresses to the 1st stage
only, weathered bands to the upper stages, which are slightly set back, and an
embattled over-sailing parapet; a 2-centred arched west doorway with chamfered
surround and hoodmould and a square headed window above this with 3 round-
headed lights and hoodmould, a clockface in the front of the 2nd stage and
circular windows with diamond leaded glazing in the sides, all with hoodmoulds;
and louvred 2-light belfry windows with hoodmoulds. The tall rectangular nave
has 2 large and widely spaced 2-centred arched 2-light windows in each side
wall, all with Y-tacery and delicate intersecting tracery incorporating trefoils
and a quatrefoil in the heads, diamond lattice glazing below, and narrow margin
panes: all this executed in cast iron; and between the windows on the north side
there is the outline of another (either not built, or removed). There is an apex
cross on the east gable; and the short one-bay chancel has a stepped triple-
lancet east window. Interior: plain west gallery on 2 cast-iron columns, and
above this a plaster coat of arms; on the south wall, a large painting (The Dead
Saviour, Virgin and Angels) by John Bryant Lane, commissioned by Lord de
Dunstanville of Tehidy in 1808 as an altar piece.