A Grade I Listed Building in Kedleston, Derbyshire 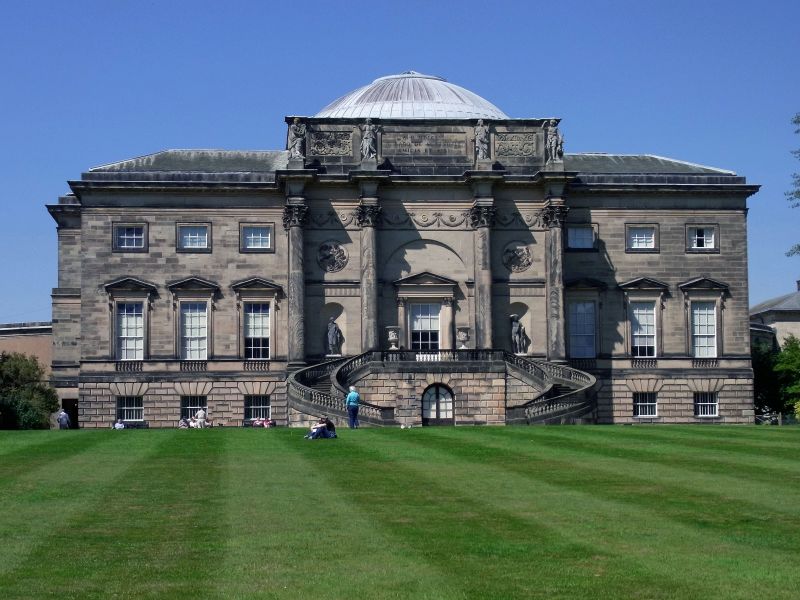 SK 34 SW PARISH OF KEDLESTON KEDLESTON PARK
3/41
Kedleston Hall
25.9.51
GV I
Large country house, set in large landscape park. 1758-65 by Matthew
Brettingham, James Paine and Robert Adam. Interiors complete by the
1780s. Red brick faced in ashlar and render. Hipped Welsh slate
roofs. Various brick stacks largely hidden within the roof wells.
Main rectangular block with quadrant colonnades and rectangular
pavilions following Palladio's Villa Mocenigo. Rusticated basement,
piano nobile and attic storeys. Principal north front: Centre block
of eleven bays. Hexastyle, giant Corinthian portico over a basement
of five round arches. Three statues on the pediment. Double staircase.
In the portico, central doorway flanked by niches with statues.
Medallions above depicting vintage, pasturage, ploughing, and bear
hunting, 1769 by William Collins. Dentilled cornice and blocking
course. Three bays on either side of the portico with square sash
windows to the basement, glazing bar sashes in pedimented aedicules
above and rectangular attic windows with moulded surrounds. Quandrants
on either side without an attic storey. The basement continues the
round-arched arcade, with windows set in. Glazing bar sashes above,
with balustrading below the sills as on the main block. The bays
divided by Tuscan pilasters. Tripartite windows to the return walls.
Linked to identical pavilions, lower than the main block but still
with basement, piano nobile and attic storeys. The upper storeys
are cement rendered. Five bays, with four attached Ionic columns
supporting a pediment. Similar fenestration to main block but with
plain surrounds. South front of 3-3-3 bays. The centre piece derived
from the Arch of Constantine. Four detached Corinthian columns
standing close to the antae and pilasters against the wall. Each
column carrying its own piece of entablature with statues above, in
front of an attic with the date 1765 inscribed. Shallow lead dome
above. Double staircase with sharply curved flights. Central door-
way with pedimented Corinthian aedicule, set within a blind round
arch, and flanked by niches with statues and medallions above, as on
the north front. Frieze of swags and medallions above. The outer bays
are given similar but less grand treatment, to those on the main north
front. The east and west elevations of 2-3-2 bays are treated more
simply, with the central feature of a Venetian window. That on the
west side was at an early date blocked. The south elevations of the
pavilions are likewise treated in a plainer manner, the three centre
bays advanced beneath a pediment. Interior: The main entrance is
into the magnificent Marble Hall, about 67ft by 37ft, and 40ft high
(taking in the attic storey). Two rows of giant Corinthian columns
of pink Nottinghamshire alabaster. They were fluted in 1775, against
the advice of Robert Adam. Frieze and coved ceiling with delicate
stucco decoration by Joseph Rose to a design by George Richardson.
Hoptonwood stone floor with inlay, designed by Adam. Around the
walls are niches with casts of antique sculpture. Above are grisaille
panels of Homeric subjects. Chimneypieces with elaborate over-
mantles by Rose, incorporating painted roundels. Beyond, in the
relationship of 'atrium' and 'Vestibulum', is the saloon, a
full-height domed rotunda. Apsed niches in the corners filling
the square outer walls. Coffered dome and central skylight.
Pedimented doorcases with pilasters of blue scagliola.
Frieze of anthemion and palmette. Painted panels of ruins, by
Gavin Hamilton, and grisaille panels of scenes of British Worthies
by J B Rebecca. In the niches are four cast iron vases on pedestals.
Two of them are stoves. The Music Room has Ionic doorcases and
delicate plaster ceiling designed by Adam. Marble chimneypiece
inlaid with Blue John. The State Drawing Room, lit by a Venetian
window to east. Corinthian order for the alabaster window and
door surrounds. Chimneypiece with scene of virtue rewarded by
honour and riches, by Spang. The Library with severe Roman Doric
doorcase. Bookcases designed by Adam. Plaster ceiling divided
into octagonal patterns. Triglyph frieze. Beyond the Saloon
is the principal Dressing Room (also called the State Boudoir),
preceeded by an anteroom, and the two divided by a tripartite
screen with pierced segmental arch above the entablature. More
delicate plaster ceiling. Chimneypiece brought from elsewhere
c1908. Similar decoration in the State Bedroom with fine chimney-
piece. Beyond is the Wardrobe (also called the Dressing Room)
which communicates with the Dining Room. Apse at the west end,
flanked by stucco medallions by William Collins. Ceiling with
painted panels by Zucchi (continents), Hamilton (seasons) and
Moorland (centre). Chimneypiece with termini caryatids by Spang.
The Main Staircase is off the Marble Hall. Cantilvered stone
staircase around a rectangular well. Carved tread ends, wrought
iron balusters, delicate wreathed and ramped handrial. Stucco
panels of 1924. The staircase leads up to the semi-state bedrooms
with plain coved ceilings, dentil cornicing and plain marble
chimneypieces. Some of the doors may be re-used from the earlier
Hall. Three other staircases, of stone, cantilvered with stick
balusters. Beneath the Marble Hall a low hall with two rows
of stone columns, and two rows of iron columns inserted in 1806.
The north west pavilion houses the kitchens and service rooms.
The north east pavilion houses the family apartments.