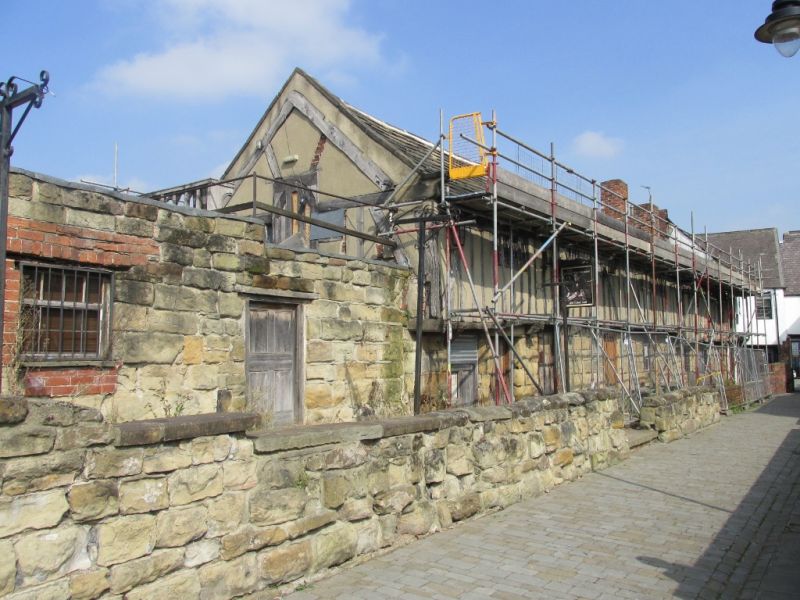 Range of 3 or 4 cottages. Probably C16 or C17, of 4 builds, altered in C18
and Cl9. Of timber-framed construction, mainly rendered, with stone slate and
Welsh slate roofs. 2 storeys, the first floors all jettied. Range immediately
behind Corn Market building: 2 boarded-up ground-floor openings; 2 jetty beam
ends; on first floor, paired 8-pane sash windows to left, sash window to right;
steeply-pitched Welsh slate roof, remains of stack to left end. Beyond this
is the start of a longer range with lower roofs, starting with a narrow bay,
possibly that of a chimney stack, with a boarded-up door, above which is one
jetty beam end, supported on an inserted outer post, and a first-floor side-
sliding sash window; Welsh slate roof and hints of a ridge stack. The range
continues with 2 boarded up ground floor windows, 4 jetty beam ends, 1 first
floor side-sliding sash window and a smaller opening; stone slate roof. The
rearmost range is the longest, and its jetty is at a different level; 3 doors
and 2 ground-floor windows, 4 jetty beams ends, first-floor openings rendered
over, Welsh slate roof with 3 sky lights; brick stack near eaves to right of
centre; shaped kneeler and ashlar coping to left. Left return: part of corner
post visible on first floor;C18 brickwork in Flemish bond to gable end. Beyond
the range are the remains of stables,, partly collapsed. Rear; ground floor
of ashlar sandstone; first floor of close studding, the studs with carpenter's
numbering. Interior: each of the cottages seems to have had 2 rooms on each
floor with a tightly-winding wooden staircase in a rear corner; one kitchen
has a late C19 set-pot and stone sink with remains of cast-iron kitchen range,
and the adjoining parlour has part of an early C18 stone fire suround; roof
of collared principal rafter trusses. Recorded by the West Yorkshire Archaeological
Unit.