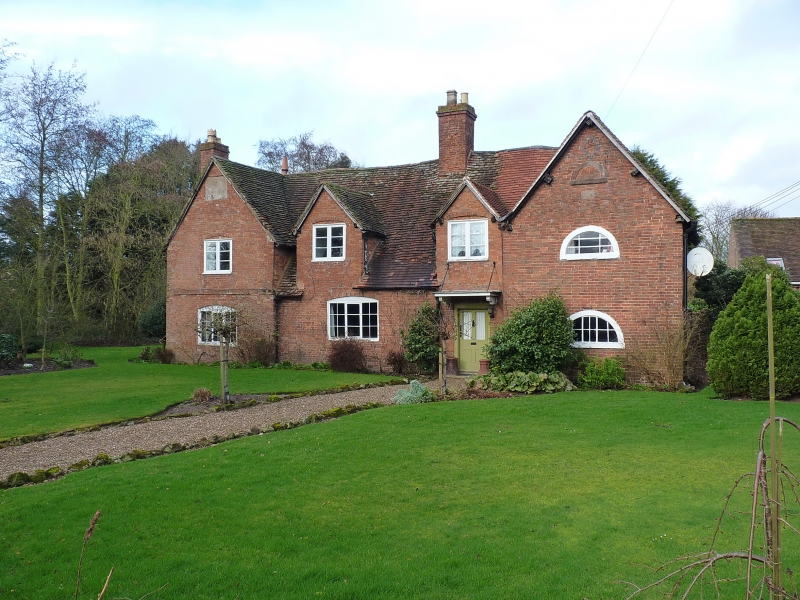 SHUSTOKE BIXHILL LANE
SP2290 (West side)
12/167 Priory Farmhouse
GV II*
House. Early C15 cruck built open hall; later C15 west cross-wing and 1620 east
cross-wing. Stack and floor probably inserted to open hall in 1620. In late C17
service wing added to rear of west cross-wing and in the late C18 or early C19
much of the timber-frame was replaced or cased in red brick. Timber-frame. Late
C18/early C19 red brick. Plain-tiled roof. Inserted ridge stack to open hall of
sandstone with brick above the ridge. Side stack to parlour cross-wing, and
projecting side stack to the later C17 extension at the rear of the parlour
cross-wing. Original plan of three bay open hall possibly extending further to
the west. The additions in late C15 and C17 now form H-plan. Open hall of one
storey and attic. 2 C19 gable dormers. Doorway to cross-passage at rear of
stack. Segmental arch to ground floor 3-light casement. West cross-wing of 2
storeys. First floor has a flush frame casement in open boxing and at ground
floor a 3-light wood casement in a segmental arch. The east cross-wing is dated
1620 in a sandstone panel reset in the red brickwork of the front gable. In the
gable a lunette now blocked, and larger lunettes with glazing at first and
ground floors. On the east side wall of this wing the framing is exposed showing
typical small framing of height of three panels to the wall which can be
compared to the large framing in the former west gable of the open hall (now
internal). Interior: Base cruck of early C15 in 3 structural bays. At ground
floor level the blades are concealed. At first floor the display truss has
evidence of 2-centred arch bracing to the collar. The arcade plate has 2
roll-mouldings. The partition wall at the west end has large framed panels with
tension bracing in 2 heights. In the roof the rafters are smoke blackened
generally. They are halved and pegged at the apex, well carpentered but with
scantlings which are generally smaller than the C17 parts of the house. There is
no ridge piece. There are 2 tiers of purlins which are tenoned to the
principals, and there is curved and paired wind bracing. The roof is
substantially intact. At ground floor there is an inglenook hearth and ceiling
carried on moulded main beam. The cross-passage at the rear of the inglenook may
be on the site of the original cross-passage. The west cross-wing is of 2 bays.
It has an original ceiling at ground floor. The roof is similar to that over the
open hall having the purlins tenoned to the principals in the same way and
paired and curved wind bracing. The 1620 cross-wing is of 2 bays and was
probably a service range beyond the low end of the hall. The roof is of
through-purlin type trenched over the backs of the rafters with ridge piece and
wind bracing. The later C17 wing at the rear of the west cross-wing has Queen
struts to the through-purlin roof. It was originally open to the roof at first
floor and heated by the inglenook of coursed and square sandstone.
(J.T. Smith: Cruck Distribution: an Interpretation of some recent maps
(Vernacular Architecture 1975))