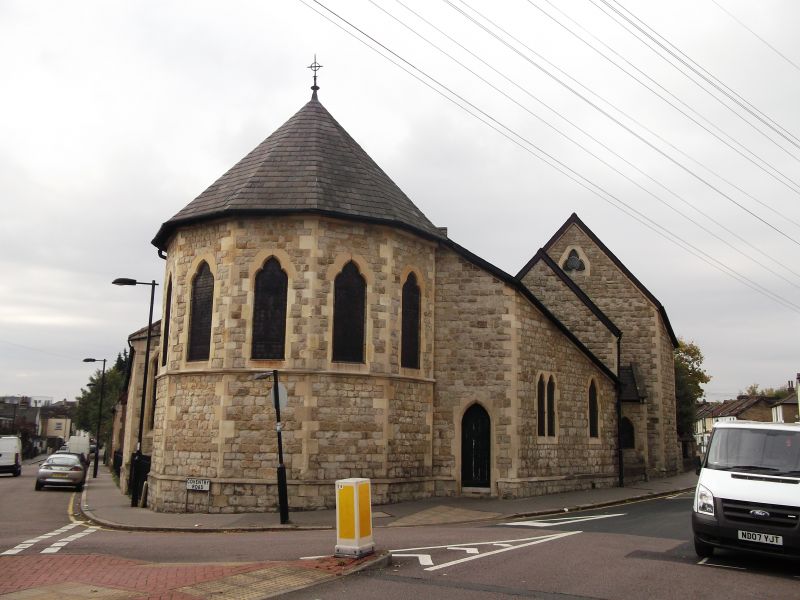 II
Parish church. Designed by G.H Lewis of Linden and Lewis in 1852 in an Early English style. Only the nave was built in 1852, extended by the same architect c1862 when a clergy and choir vestry was added at the south-west corner and a western gallery added. In 1863 a short south aisle was added, in 1864 a north aisle, in 1868 the south aisle was extended, in 1869 a chancel with polygonal apse added, in 1884 a north-east porch added and in 1890 new clergy and choir vestries were added, the north aisle was reroofed and the baptistery and south porch added.

Built of Kentish ragstone with buff limestone dressings with slate roof. Nave of six bays with bellcote at west end with cross saddlestone and chancel with polygonal apse with trefoil lancets. Three gabled triple windows to clerestorey on each side. North aisle of three bays has two paired trefoil lancets. South aisle has five lancets and one trefoil window and there is an attached flat roofed cement rendered vestry.

INTERIOR: nave has arcade of squat columns with arches having dying mouldings, cross-braced roof with two tiers of purlins, late C19 pulpit and pews. West window has fine stained glass of c1893 by James Powell and Sons depicting St Michael, St Gabriel and St Raphael and trefoil of lion's head and St Mark above by the same artist. North aisle has arch-braced roof of five bays with two tiers of purlins and bronze lectern. Baptistery of 1890 has elaborate font, gilded ironwork, three stained glass windows in the southern wall possibly by A.C Hemming and five scenes of Christian Baptism on canvas attached to the walls, possibly by Rupert Corbould, who worked for the stained glass artist A.C Henmiing. South aisle has stained glass of The Good Shepherd by Henry Holiday, another reproducing Holman Hunt's "The Light of the World' and a Madonna by artist unknown. Chancel arch and low ironwork screen leads to chancel with pews, organ, Minton tiles to floor and stained glass windows of c1883 by
Arthur O'Connor of Christ teaching, the Crucifixion and the Assumption.