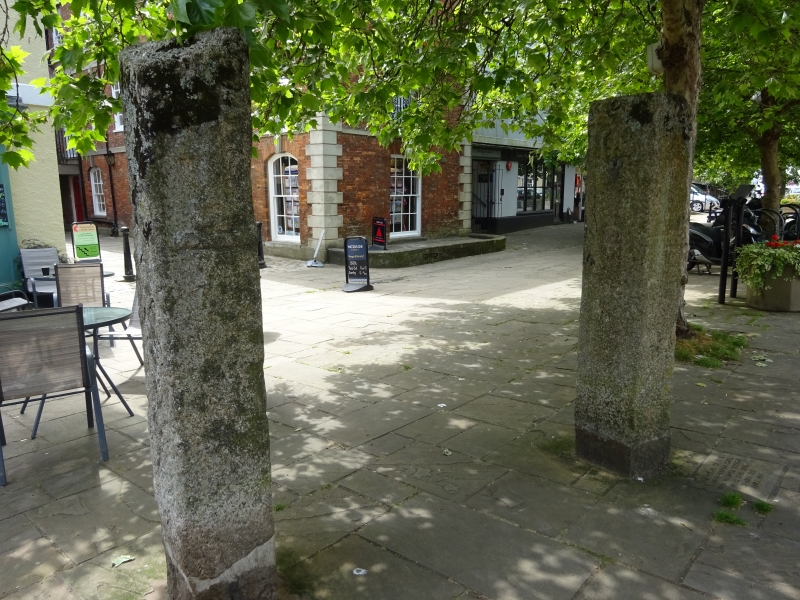 Two granite pillars, one bearing the date 1687, originally identified as mid-C18 tollgate posts; however, more recently interpreted as the C17 gates to the town marshes.

Two granite pillars, one bearing the date 1687, originally identified as mid-C18 tollgate posts; however, more recently interpreted as the C17 gates to the town marshes.

PLAN: two pillars, each with a square cross section.

These two stone pillars in the centre of Totnes had originally been identified as two of the three former tollgate piers which stood adjacent to the tollhouse on Totnes Bridge, erected by Totnes and Bridgetown-Pomeroy Turnpike Trust in 1768. However, the appearance of the pillars does not entirely accord with historic photographs and pictorial representations of the tollgate piers which show one large central stone pier and two outer timber posts. More recently, an alternative hypothesis put forward is that these were the gates to the town marshes, the entrance of which was originally located near to the area between Dartmouth Inn (Grade II) and The Methodist Chapel (Grade II), The Plains. The carvings on the pillars have been identified as the town coat of arms and the date 1687.

In 1978 the pillars were located next to the Town Mills (Grade II), Coronation Road, moved to this site at an unknown date. They have more recently been relocated opposite the William John Wills Monument (Grade II) on The Plains.

The pair of C17 granite pillars which stand on The Plains, in the centre of Totnes, is listed at Grade II, for the following principal reasons:
* Architectural interest: constructed in granite, they each retain carved details on the shafts including a date and the Civic Arms of Totnes;
* Historic interest: they add to the history of the town’s development;
* Group value: it has interest as part of a group of historic street furniture in Totnes, including the nearby obelisk in memory of the C19 British surveyor William John Wills (Grade II).