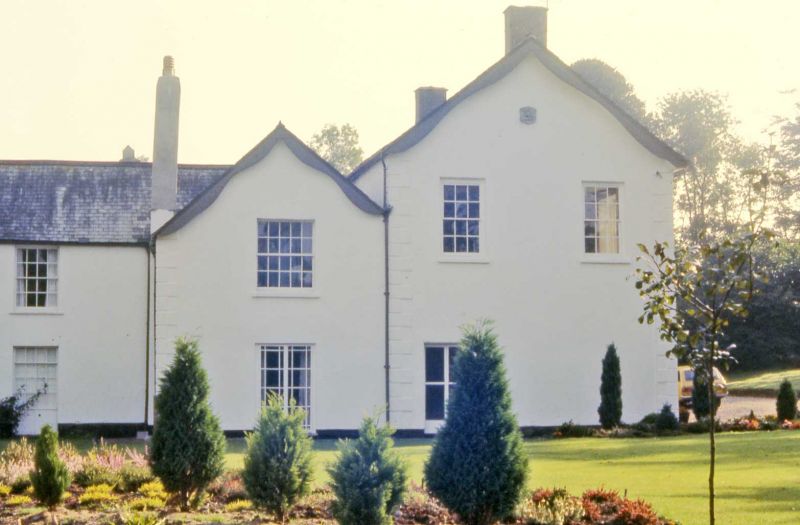 KINGS NYMPTON KINGS NYMPTON
SS 61 NE
3/159 The Old Rectory
GV II
Former rectory, now private dwelling. Probably late C16 or early C17 origins, but
earlier fabric may be concealed. Heavily remodelled and extended at front and rear
in 1851 by John Cock of South Molton. Painted rendered stone rubble and cob. Slate
roof with gable end rendered stacks and shaped bargeboards.
Plan: rear range partially concealed by C19 front range contains the early fabric
and appears to be a much remodelled probably 3-room-and-through-passage farmhouse,
with a large rendered rear lateral hall stack; the roof was not accessible at time of
survey but the short curved feet of 2 cruck trusses were visible to the chamber over
the hall, and it is possible the roof structure itself may be medieval. In the early
C19 a front range was added, consisting of a single large principal room to left of
wide entrance hall. Possibly at the same time, a gable-ended wing was added to the
rear left of the original range and a C19 stair projection in the inner angle.
Exterior: 2 storeys. 2-window range. Two C19 16 paned sashes above C20 tripartite
sash to left of C20 door and doorcase in classical style. Rusticated quoins. C19
fenestration largely intact to rear ranges.
Interior: brief interior inspection suggested C19 joinery and details largely intact
to front and rear ranges, including decorative plaster cornices to the principal
rooms, marble chimneypieces and staircase with decorative wrought iron balusters.
Former hall of rear range has 2 deep chamfered cross beams, that to right with
mortices possibly for a screen. Hall fireplace rebuilt. Chamber over hall has C17
moulded plaster cornice and short curved feet of cruck trusses visible. Roof space
not inspected.