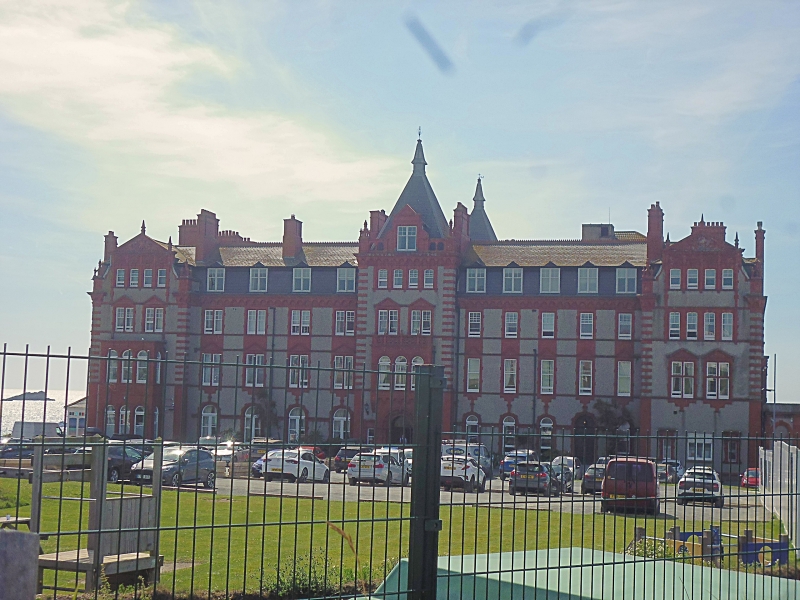 Hotel. Dated 1898, by Silvanus Trevail. Stone rubble, rendered, with much
terracotta. Slate roofs behind a parapet, with mansard.
Plan: A very large building, almost square on plan, with a projecting bay to each
corner and projecting centrepiece.
Exterior: A symmetrical front of 3 storeys and attic, 2:4:2:4:2 bays, with Lombard
frieze. The central and end bays are advanced. Centre has round-arched doorway,
corbelled 3-light window bay above with strapwork balustrade. End bay to left has
similar 2-storey terracotta bay. The ground floor windows are round-headed in a
Gibbs surround, the keystones integral with the aprons of the 2-light windows at
first floor, which have pediments. The second floor windows are 2-light; gabled
dormers above. The central tower has a pyramidal roof with square cupola, with an
arcaded balustrade with a pedimented dormer at the front. The end bays have
terracotta pediments with anthemia in relief and obelisk finials. Rusticated quoins.
The left side is of 7 bays, with similar fenestration without the projecting bays.
Small single storey C20 addition. The right side has single storey wing with
rounded end, continuous windows.
The rear faces the sea; it is similar to the entrance front, but the central tower
has 2-storey segmental bay with an open loggia above with Italianate masks in
terracotta. Terracotta gables with obelisk finials to the end bays. The only
exterior alteration is a bay window infill between the central tower and the end bay
to left.
Interior: The central entrance leads to an entrance hall, with the stair hall to
left; imperial stair with a cast iron balustrade and Ionic columns in Devon marble.
Plain plaster cornices to the main rooms at ground floor.
The Headland Hotel is a prominent landmark in Newquay and one of the few hotels to
retain its original appearance.