A Grade I Listed Building in Crantock, Cornwall 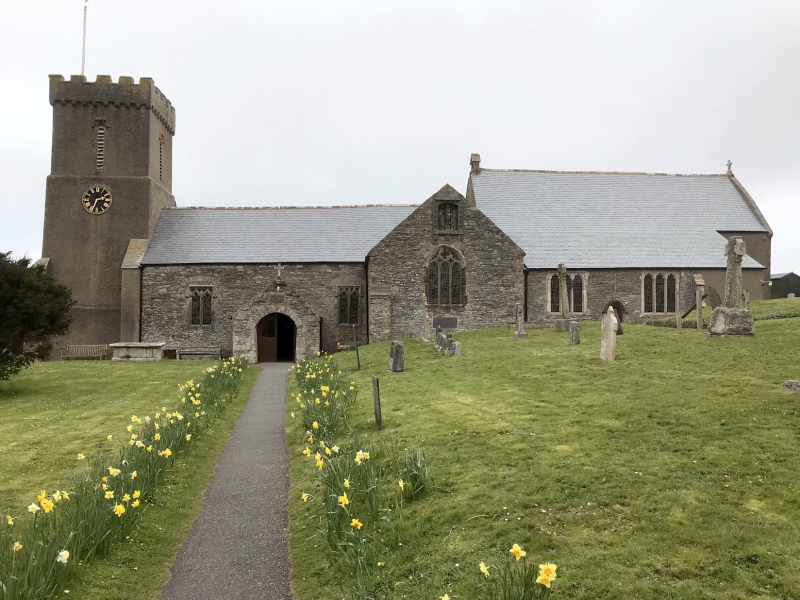 Parish church. C12; college instituted by Bishop Brewer of Exeter in 1236, with
enlargement of chancel. Chancel rebuilt in C14. In 1412, the tower collapsed and
was rebuilt, the lower stage appearing to date from the C13, with upper stage of C15.
C18 restoration and alteration of roofs and windows; late C19 restoration, mainly
from 1902-07, by Edmund Sedding. Slatestone and granite rubble with granite
dressings. Tower roughcast. Slate roofs with crested ridge tiles and gable ends
with raised coped verges to east.
Plan: Nave and chancel with north and south transept of C12. The west tower probably
added in C13, with C14 work including the enlargement of the chancel to serve the
College. In C15, the tower was rebuilt, and a south porch added. The north and
south aisles are probably of C15.
Exterior: The nave has 2 bays visible to south, with the porch set between; 2
windows, both C19 2-light cusped windows with relieving arches. The north side has
two C19 windows with cusped lights and relieving arch.
The south porch is gabled with raised coped verges and cross finial. Rounded arched
doorway with C20 double doors. C18 slate over with inscription: Ego sum Ianua per me
Qui intrabit Servabitur. The interior of the porch has slate floor and stone benches
to sides. C19 wagon roof. Inner 4-centred arched doorway, chamfered with outer
hollow moulding with pyramid stops. C19 door.
The north transept is gabled with raised coped verges and cross finial; weathered
ashlar angle buttresses. C19 3-light Perpendicular window to north.
The south transept has one rough rubble buttress to left; gable end has 3-light C19
Perpendicular window ; niche above with statue of Christ crucified with attendant
figures, inset stones with lettering, the inscription: Who died for us ...... erected
by Father Parsons, circa 1900.
The chancel has a 5-light C19 Perpendicular east window with rosettes in the tracery.
Chancel and aisles have the east end roughcast. The chancel roof forms a catslide
over the aisles.
The north aisle has 4-centred arched doorway with hollow-moulding and hoodmould, C19
door. To left, a single C19 cusped light with hood mould. To right two 3-light C19
Perpendicular windows and buttress. East end has similar 3-light window.
The south aisle has similar doorway and 2-light window to right and left. East end
has similar 3-light C19 window.
West tower in 3 stages, each stage set back, with angle buttresses reaching to the
second stage only. Corbelled embattled parapet. 4-centred arched west doorway with
C19 panelled double doors; 3-light C19 Perpendicular window above. Third stage has
single tall cusped lancet with slate louvres and hood mould to all sides ; second
stage south clock. Projecting stair tower with pitched roof at second stage level to
north with lancet; lancet at second stage to north.
Interior: Plastered walls and slate floor. C19 wagon roofs, painted above the rood
with painted bosses; common rafter roofs in the aisles. Chancel has similar roof
with painted bosses and cross braces, with angel and shield as corbels on the wall-
plate. Nave has holy water stoup. Tall point 4-centred arch with imposts to tower.
Nave has wide segmental arch to the north and south transepts; at each side there are
the remains of C12 piers with ring moulding at the base and carved stops. The north
transept has a blocked C12 doorway in the west wall with round arch and imposts; set
in front of this a C19 internal porch with panelled door containing re-used C15 -
carving remaining, with fine C19 carved screen with open arches and roof above; C15
carving used in the screens between the chancel and the aisles. C19 panelled wooden
reredos with carved figures.
The arch from each transept to the aisles is segmental with imposts; on the inner
side of the north transept arch is a 4-centred arched chamfered doorway to the rood
stair, with a very fine carved C16 door with panels, vines and grapes and primitive
guilloche moulding. The upper doorway to the rood is above the arcade pier. The
south aisle has a C19 arch to the end bay and C19 piscina.
Fittings: Fine C12 stone font in nave, with circular bowl on central stem with four
outer shafts surmounted by faces; the bowl has a later carved inscription and date
1474. Chevron carving to the rim. Fragments of carving set on the south wall of the
tower, set on a wooden panel. Nave has benches with C19 carved bench ends, the work
of Miss Rashleigh Pinwill. C17 communion rail with turned balusters. C19 carved
wooden pulpit in nave. In the south transept a wooden arched panel, with painted and
carved low relief scene of Abraham, probably C17 Dutch, found in the parish.
Sanctuary chair in the chancel, probably C17.
In the nave there are some slate paving stones with C18 dates and initials. C19
stained glass. Fragments of medieval glass in the sacristy with a Latin text.
Sources: Pevsner, N.: Buildings of England: Cornwall 1970. Hattam, H.: The Parish
Church of St Carantoc. 1973.