A Grade II* Listed Building in St. Giles on the Heath, Devon 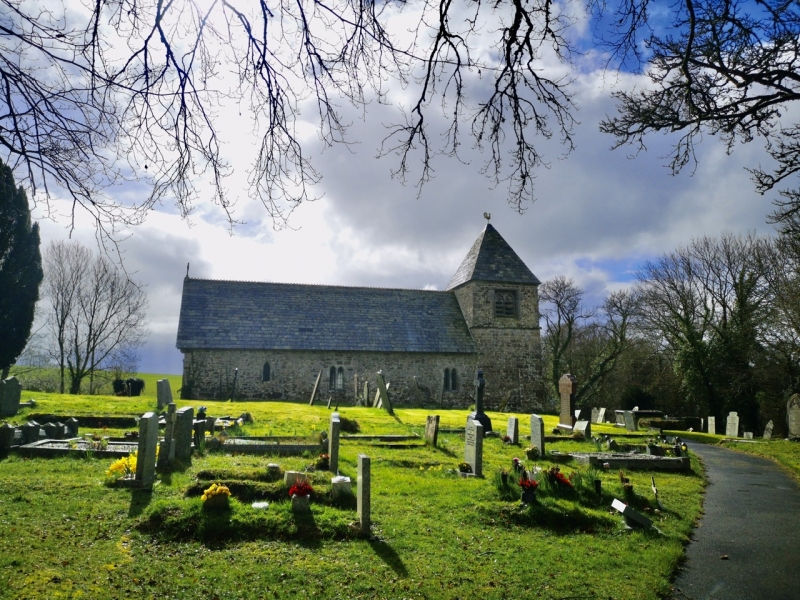 Find accommodation in
Saint Giles on the Heath

Parish church. Chancel and possibly tower C13, aisle C15, restorations of circa 1868
by Sedding and 1878 by J.P. St Aubyn. Stone rubble with granite dressings, slate
roof with C19 crested ridge tiles.
A small C13 church of west tower, nave and chancel was enlarged in the C15 by a 5-bay
south aisle. The church was reseated by Sedding in circa 1868 (Whites Directory), the south wall rebuilt, the tower raised and re-roofed and the body of the church re-
roofed by St Aubyn in 1878. The south west porch is largely C19. Some Early English features, mostly Perpendicular and C19.
The east end has deep eaves and bargeboards of decoratively-cut slate typical of St
Aubyn. 3-light C15 Perpendicular granite east window with cusped lights, hoodmould
and label stops. On the north side the nave plinth indicates considerable
rebuilding, deep eaves. To the west, a chamfered 2-centered arched blocked priest's doorway with broach stops. The chancel window is a late C13 cinquefoil-headed lancet
with a deep internal splay. To the left and right of the priest's doorway a pair of
chamfered lancets, probably C19 copies of medieval windows with stanchions, saddle
bars and deep internal splays. The south aisle has deep eaves with bargeboards of
decoratively cut slate and a 3-light granite Perpendicular style with hoodmould and
carved label stops. The aisle has three 3-light square-headed cusped south windows,
the 2 easternmost are circa late C15 granite with carved label stops, the westernmost
is a C19 freestone replacement. The south west porch has deep eaves, slate
bargeboards and a shallow-moulded outer doorway with a slightly cambered head. The
porch has a circa 1878 roof and a 2-centred arched chamfered inner doorway with
broach stops. The porch floor is laid with slates on end in a chequerboard design.
2-stage unbuttressed west tower flush with the nave wall with a high string course,
an 1878 pyramidal slate roof and a C19 polygonal stone chimney shaft on the south
west corner breaking through the roof. The tower has a hollow-chamfered 2-centred
arched west doorway with broach stops, hoodmould and label stops. 2-light square-
headed cusped belfry openings on the north, south and east faces are C19. The tower
roof is crowned by a C19 weathervane.
Interior Walls plastered except the west wall, no chancel arch, low double-
chamfered tower arch with an approximately semi-circular head. 5-bay granite south
arcade, the piers of 4 hollows and 4 shafts, carved moulded capitals to the shafts
only, the hollows terminating in a moulded stop. The capitals are unusually large
for the height of the piers. Circa 1878 braced collar rafter roofs with struts on to
the wallplates. The timber work is open above the arcade between the nave and aisle.
The font may be C12 or C13: a plain palyphant bowl on a square base carved with
palmettes in roundels and ramshorn stops, the base is not necessarily contemporary
with the bowl. The chancel screen is 2 sections of cut down'wainscot from a circa
late C15 rood screen. Some unusual C16 or possibly C17 softwood bench ends, repaired
and fitted to C19 benches. The bench ends are wide and rectangular with hollow-
chamfered borders: debased blind tracery is carved below various motifs including a
flower, a fleur de lis and a man's head. Circa early C20 pulpit of'timber traceried
panels on a granite base, early C20 gabled timber reredos, the central gable with a
nodding ogee, the side panels carved with lilies and roses. C19 timber lectern.
Large slate ledger stone fixed to east wall of south aisle commemorating Thomas
Carey, date probably of 1583, inscription round border. On the south wall of the
aisle a slate memorial commemorating Thomas Spettigue of East Panson (qv), died 1735:
a segmental-headed slate with the inscription framed by Corinthian pilasters and an
entablature. On the north wall of the aisle a nowy-headed memorial slate to Edward
Mill, died 1760, and other members of the family, a flower and angel carved in the
head and a scratch-moulded border. A reredos of the circa early C19 is fixed to the
south wall of the aisle at the west end, 4 slate panels are inscribed with the 10
Commandments, Creed and Lords Prayers, the outer panels are pedimented, the inner
panels segmental-headed with the IHS monogram above.