Hayes Barton Including Garden Walls Adjoining to the South East 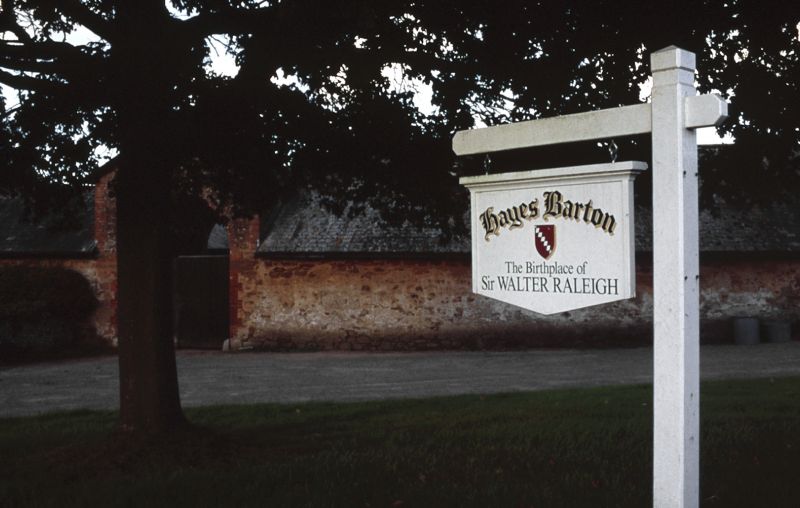 EAST BUDLEIGH HAYES LANE
ST 08 NE
3/70 Hayes Barton including garden
ll.ll.52 walls adjoining to the south-east
GV II*
Farmhouse, former manor house and C16 home of Raleigh family. Parts may be C16 or
earlier but house appears largely late C16-early C17, possibly associated with date
stone of 1627, modernised in late C19. Plastered cob on stone rubble footings;
stone rubble stacks, most with limestone ashlar quoins, and all topped with late C19
brick; thatch roof.
E-plan house facing south-east. The main block has a 4-room plan, 2 main rooms and
a small unheated lobby each end. There is a central through passage with front 2-
storey porch. The main rooms each side of the passage both have projecting rear
lateral stacks; the 1 to right (north-east) is a service room, the 1 to the left is
the hall. The present main stair in the inner room is C19 but may be a replacement
of the original. 1-room parlour crosswing projecting at right angles to front of
inner room and has a projecting lateral stack on the outer side. The kitchen
crosswing projecting forward from the other end has a front gable-end stack. The
wing overlaps the right end a short distance. The front wall is canted across the
corners in the angles between the main block and crosswings. 2 storeys throughout.
The front would be symmetrical if the front end of the kitchen crosswing contained
windows. 1 window to the porch, 1 more each floor either side to the main block,
another in the angles, on the inner side of each crosswing and the end of the
parlour crosswing. The only early C17 window is that to the room over the porch.
It has a 3-light oak frame with ovolo-moulded mullions. The rest are C19 and C20
replacement casements. All contain leaded glass with intersecting Y-tracery along
the top and the first floor window of the parlour crosswing contains the Raleigh
arms in stained glass. The gable end of the porch has early C17 oak bargeboards
with billet enrichment and apex pendant. The main block window either side also
have gables over with similar bargeboards and pendants. The outer arch of the porch
appears to be largely a C19 rebuild. The cranked head piece maybe C17 but the
chamfered and step-stopped posts are C19. There is a soffit-moulded bressumer to
the first floor. Inside the porch there are wooden benches. C17 doorframe and
door. The oak doorframe has a moulded surround with urn-scroll stops and large
studded plank door with plain strap hinges. All roofs are gable-ended.
The rear elevation is less regular than the front although here some windows are
blocked. The hall window has leaded glass like those on the front, the others have
glazing bars and an unglazed larder window at the left end (2 more on the end wall).
Rear passage door behind a C20 brick and slate-roofed porch. The 2 rear stacks and
the parlour stack are all similar. They are built of local conglomerate sandstone
rubble with Beerstone ashlar quoins and chamfered plinth. The hall retains its
original double chimney shaft which includes a Beerstone plaque inscribed with
Richard Duke's initials and the date 1627.
Interior is largely the result of C19 and C20 modernisations but these seem to have
been superficial. Where earlier features are exposed they are consistently late
C16-early C17. In the service room to right of the passage the crossbeam is boxed
in and the fireplace may be reduced in size. It is built of stone rubble with a
slightly cambered soffit-chamfered oak lintel. The hall has a replacement crossbeam
but the C17 fireplace is exposed; it is Beerstone ashlar with a chamfered surround,
the lintel includes a number of early graffiti. No carpentry detail shows in either
wing below the roof. The parlour fireplace is blocked and the kitchen fireplace is
built of C19 brick. No early fireplaces are exposed on the first floor. The roof
is late C16-early c17. The trusses are plastered over but their shape suggest
jointed crucks. In the roofspace the trusses are clean and the construction of the
late C16-early C17 oak-framed crosswalls is exposed; close-set studs with lathes
set in individual holes to provide a ladder backing for cob infill.
Hayes Barton is an important house for its historical connection with the Raleigh
family. Originally called Poerhayes or Powerhayes after the Poer family it was
owned by the Duke family by the C16. A lease of 1525 between John Duke and Henry
Kenwood excluded a chapel, no trace of which survives today. In 1551 the property
was leased to Walter Raleigh senior but by then there was no mention of a chapel.
It seems likely that the eldest of Walter Raleigh's sons, George, lived here until
his death in 1597. Walter the younger (later Sir Walter) tried unsuccessfully to
buy the place from the Dukes mentioning that it was where he was born. It remained
with the Dukes and eventually became part of the Rolle estate.
By tradition the chamber over the parlour is the birthplace of Sir Walter Raleigh.
However the whole house appears to be the result of a major refurbishment if not
rebuilding of the late C16-early C17, possibly 1627. It is nevertheless still an
interesting building of some quality.
Source: private correspondence with Professor Joyce Youings of Exeter University
Department of History and Archaeology.