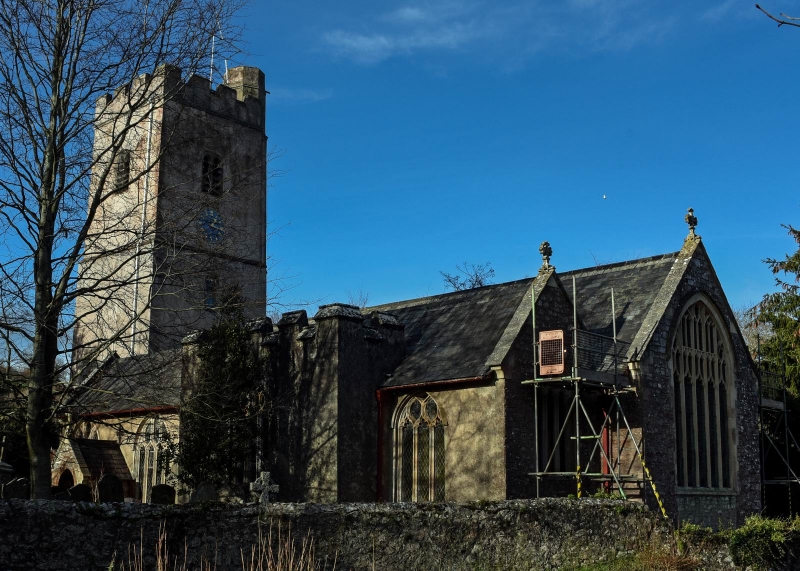 SX 86 NE KINGSKERSWELL CHURCH END ROAD (west side),
Kingskerswell
3/155 Church of St Mary
-
23.8.55
GV II*
Parish Church. Some possibly C14 fabric, early C15 nave and south aisle, late C15-
early C16 north aisle and early C16 north porch. Main restoration in 1874. Mostly
rendered, sandstone/limestone walls with some Bathstone, granite, limestone and
volcanic stone dressings. Gable ended slate roof.
From the evidence of the south transept the building would appear to date from the
C14 and the stone effigies probably also date from this time. In circa early C15
the nave was reconstructed and the south aisle added partially enclosing the
transept. C15 tower. In the late C15/early C16 the north aisle was added
destroying any evidence of a north transept. In the early C16 the 2-storey north
porch was built. The rood screen was removed at the end of the C18, reputedly to
Stover although the panelling is partly preserved. In 1874 the chancel was heavily
restored and the east window renewed. At the same time the nave was reroofed and 6
other windows restored. The stone effigies were moved to their present positions in
the north aisle during restorations in 1834 and 1874 when the windows were renewed.
One at least is likely originally to have been in the transept.
Unbuttressed 2-stage west tower has restored west doorway and 3-light Perpendicular
window in Bath stone. On north side is demi-octagonal stair turret with inserted
pointed arched doorway. To the right of it on the first stage is a single light
trefoil headed window. The north aisle windows are C19 3 and 4-light Perpendicular
restorations in Bath stone. Large 2-storey north porch has heavily moulded round-
headed doorway above which is 2-light mullion window with 4-centred arched lights,
both doorway and window are of limestone. C19 stair turret projecting from west
side of porch. Narrow 4-centred granite arched doorway towards east end of north
aisle. Chancel projects from the aisles with a 5-light Perpendicular window of
1874. East window of south aisle has C15 granite rebated frame and volcanic stone
tracery and hoodmould but the mullions have been replaced in limestone. The south-
east window of south aisle appears to be completely C15 with granite frame and the
rest volcanic stone. Transept window appears to be slightly earlier with more
intricate tracery although still Perpendicular. The transept has C19 battlements.
The other south aisle windows are C19 Perpendicular restorations. Small south porch
has been considerably restored but some original fabric to the doorway survives
which is of red sandstone with a 4-centred arch. The south doorway is also 4-
centred in limestone, partially restored. Probably C16 oak studded door with
central vertical rib. Cobbled floor to porch with date 1719 and indistinct initials
below. North porch also has patterned cobbled floor. Stone seats and barrel roof.
4-centred arched Beer-stone north doorway with chamfer and round moulding and
projecting square-headed architrave. Contemporary heavy oak studded door. The old
stocks are kept in the porch.
Interior has 2 good 5-bay arcades of different date and style. Earlier south arcade
has octagonal red sandstone piers with shallow moulded Beerstone capitals and
chamfered 4-centred red sandstone arches. The later C15/early C16 north arcade is
in Beer-stone with Pevsner type-B piers, foliage capitals and moulded 4-centred
arches. No chancel arch, narrow pointed tower arch with chamfered imposts. The
transept has early Perpendicular blind arcading beneath and interrupted by the south
window which may originally have housed one of the effigies. Piscina in south wall
of chancel has trefoil-headed opening. C15 octagonal stone font with roll moulding
at top and base of pedestal. Some of the panelling from the C15 rood screen has
been re-used in the chancel stalls.
There are 3 medieval stone effigies in the north aisle beneath the windows reputed
to represent Sir John Dinham and his 2 wives which suggests they are circa early
C14. The most easterly one is of a lady with a coronet and a rich stomacher, her
feet resting on a dog. At the centre is another lady with a stiff head-dress, her
feet resting on a wyvern and 4 angels supporting her. Towards the west end is the
effigy of a knight, in a pointed helmet, mail gorget and surcoat on which are the
arms of Dinham. This memorial is elaborately carved with niches and figures at the
front.
Fragments of old glass survive re-used in the upper lights of the east window and in
the central south aisle window. The pulpit comes from Bradford on Avon and was
presented in 1889.
This Church preserves a largely medieval fabric with the 2 different arcades and the
stone effigies being of particular interest and the survival of some early windows
relatively unusual.