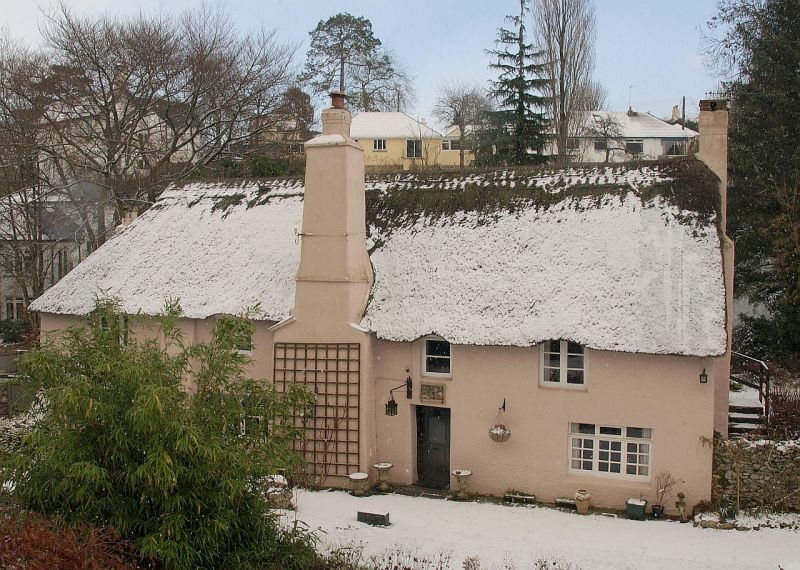 SX 86 NE KINGSKERSWELL CHURCH END ROAD (east side),
Kingskerswell
3/162 Pitt House Restaurant
-
GV II
Restaurant, originally farmhouse. Early C16 with C17 alterations, modernised and
extended in C20. Rendered rubble and/or cob walls with thatched roof gabled to the
right and hipped to the left. 2 rendered rubble stacks, one lateral projecting at
the front and one projecting from the right gable end with a rendered brick shaft.
Small rendered brick stack at left end.
Originally 3-room and through passage plan, with lower room to the right, open to
the roof at least over hall and probably lower room, with central hearth. Ceiled in
circa early C17 when front lateral stack was added to hall and gable end fireplace
to lower room. Newel stone stairs reputedly situated in hall have since been
removed. C20 staircase inserted into rear of passage and extension added behind
part of hall, passage and lower room.
2 storeys. Asymmetrical 4-window front of C20 1, 2 and 4 light casements with
glazing bars; far right ground floor window is late C20 3-light with small panes.
C20 plank and glazed door to passage at right of centre. The stack projects to its
left and beyond the left-hand ground floor window is a buttress. Flat roofed C20
extension at rear.
Interior: 2 original smoke-blackened open trusses survive over hall, one with an
exposed foot on the first floor is a side-pegged jointed cruck. Both had threaded
purlins and diagonal ridge, one still has its straight morticed collar. The
remainder of the roof timbers are C18/C19 with lapped and pegged collars, and C20.
Very good screens passage with both circa early C16 plank and muntin screens
surviving. Chamfered muntins and diagonal cut stops to left hand screen, base of
right-hand screen does not survive. Chamfered shoulder-headed doorway to each
screen. Simple roll moulded head beam probably inserted concurrently with chamfered
diagonal-stopped joists. Hall fireplace has wood lintel cut away at centre which
rests on rounded corbel stones. Chamfered cross beam and half beam at inner end.
This house retains a relatively traditional facade and contains some good quality
internal features from different stages of its development.