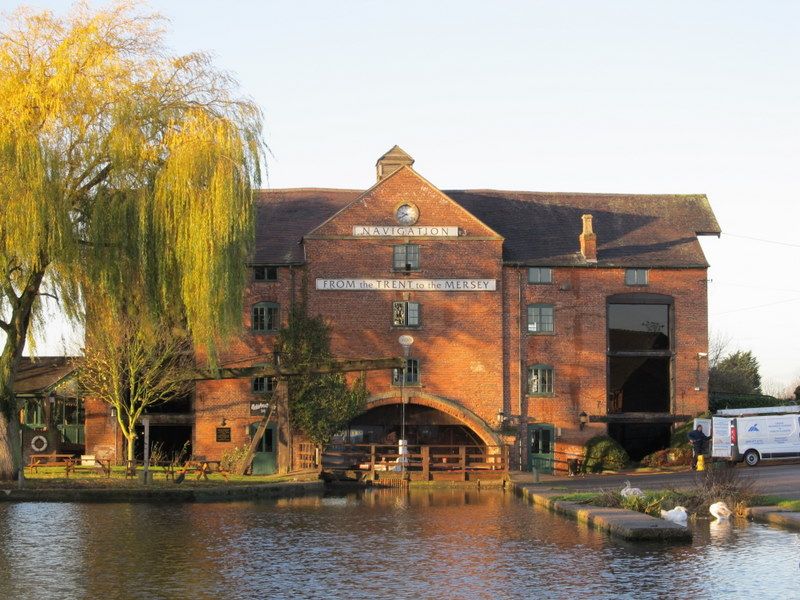 PARISH OF SHARDLOW AND GREAT WILNE,
LONDON ROAD (South Side),
The Clock Warehouse

Former corn warehouse, converted c.1970 to museum and tea rooms, now public house. 1780.
Red brick with brick and stone dressings and red plain
tile roof with central louvred vent, projecting hoist roof to
north, and stepped eaves band. Four storeys and five bays with
wide slightly advanced, gabled central bay. East elevation has
a full width segmental brick arch with stone hoodmould and
key-block to centre bay flanked by segment headed door cases with
plank doors, that to north with an insurance plaque over.
Beyond to either side there are three storey segment headed
hoist doorway with timber lintels at floor levels, now
completely glazed. Above the central arch is a fixed small pane
window below a flat brick arch with stone key-block and to either
side there are similar segment headed windows. Similar windows
in same arrangement above with a small oval painted plaque below
the central window, inscribed '1780'. Above again there is a
similar window to the central bay with its keystone running into
a plain band across the gable at eaves level and to either side
there are two flat headed 2-light windows below the eaves.
Below the central window is a large painted sign inscribed 'From
the Trent to the Mersey' and above in the gable there is another
painted sign inscribed 'Navigation'. Over this is a clock face
set in a circular stone surround. North elevation has a two
storey segment headed hoist doorway to first and second floors
with a small segment headed window above, and the hoist over.
West elevation similar to eastern elevation except outer bays
have segment headed windows instead of large doorways. Interior
has the original floors and timbers.

One of the earliest in a series of canal warehouses, built after the completion of the
Trent and Mersey Canal when Shardlow was a thriving inland port.
The building had its own spur from the canal to enable narrow
boats to get right into the building to unload, via the central
arch.