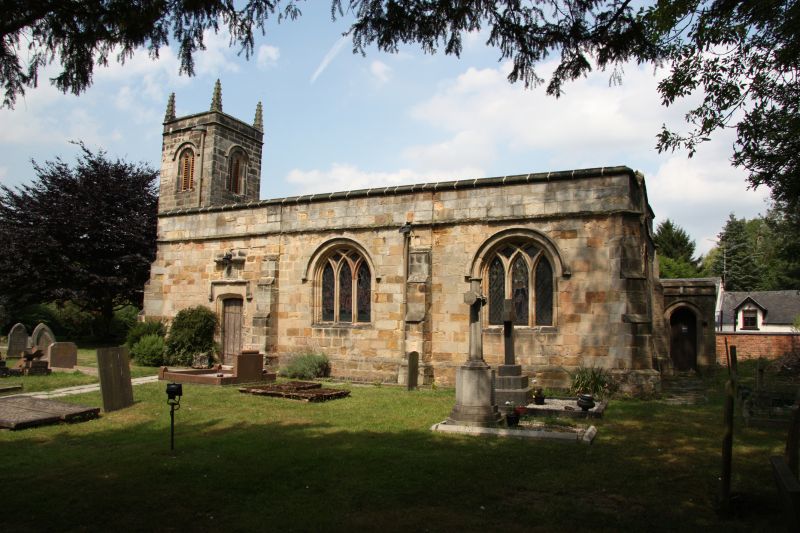 Parish church. 1593, built for Sir Michael Willoughby. 1841
north aisle and vestry added, also church restored and repaired.
Ashlar and coursed squared stone with stone dressings, plinth
and moulded eaves stringcourse to nave. Shallow pitched slate
roofs are hidden by low parapets. West tower, combined nave and
chancel, with large north aisle and vestry. West tower has two
stages with upper one slightly corbelled out. The first stage
is blank except for a small lancet to west but the second stage
has Y-tracery, four-centred arched louvred bell openings in
deeply chamfered surrounds with returned hoodmoulds, to all
sides. Above, there is a moulded eaves stringcourse with
blocking course above topped by chamfered copings, and each
corner has a crocketed pinnacle. Between the tower and the
north aisle is a slight gap. The west elevation of the aisle
has stepped buttresses to either side of a central 3-light,
four-centred arched window with cusped ogee headed lights and
pierced spandrels, also with hoodmould, which has carved head
stops. Above, the gable has ridgeback copings and a stone ridge
cross. North elevation of aisle has two 3-light intersecting
tracery four-centred arched windows with cavetto moulded
mullions and surrounds, also with returned hoodmoulds. Attached
to east is the vestry which has a flat headed 3-light window to
east and, facing south, a four-centred arched doorcase with
foliage labelstops to hoodmould and a plank door. East
elevation of the chancel has angle buttresses to either side and
a small central Y-tracery window with hoodmould. South
elevation has two 3-light semi-circular headed windows with
cavetto moulded mullions and surrounds, the originals of those
copied on the north aisle. To the west of each window is a
stepped full height buttress reaching to the top of the
parapets. Beyond to west is the moulded, four-centred arched
south door with its original studded wooden door and over, above
a returned hoodmould is a carved stone plaque with dripmould
which has the Willoughby coat of arms and the date '1593' carved
on it. West end of nave has a stepped full height angle
buttress and a blank west wall. Interior has a two bay 1841
arcade with wide, double chamfered, four-centred arches on
octagonal piers and responds which have moulded capitals and
bases. All roofs are C19. Tower arch is narrow with pointed
arches on two different levels. The chancel is separated from
the nave by a simple oak rood screen with nicely carved heads to
the centre and ends of the top rail. The west end of the north
aisle has a wide moulded four-centred arch through to the organ
bay and the west end of the aisle has a small pointed door
through to the vestry. The chancel has an early C18 column on
vase baluster altar rail and two C19 painted commandment plaques
to either side of the altar. Nave has 1841 plain pews and an
octagonal wooden pulpit with a frieze of cusped ogeee headed
openings to top. To the west end of the nave is an exceptional,
late C16 alabaster font with moulded base, thick tapering stem
with strapwork and an octagonal bowl with alternating crest and
strapwork designs. Above the tower arch is a hatchment,
probably of similar date, with the painted figures carved in
relief. Memorials include a brass plaque in the chancel to
Michael Willoughby who died Jan 1591, two slate and white marble
wall memorials in chancel of c1859 and 1827 to John Hancock
Hall, his wife and his children, and two more slate and marble
memorials in the nave, one of 1928 and the other of c1843 to
William Hodgkinson. There is also a simple slate memorial of
c1798 to the wife of Joseph Cocker and two enamelled brass
plaques to members of the Harrison family. To the west of the
door is a large painting of Christ, dated 1842 and signed
'Kelazerges'. Chancel west window, the south nave windows and
the tower lancet all have mid-C19 stained glass whilst the north
aisle windows have stained glass of c1875 and c1918.