Latin College and the Latin Cottage 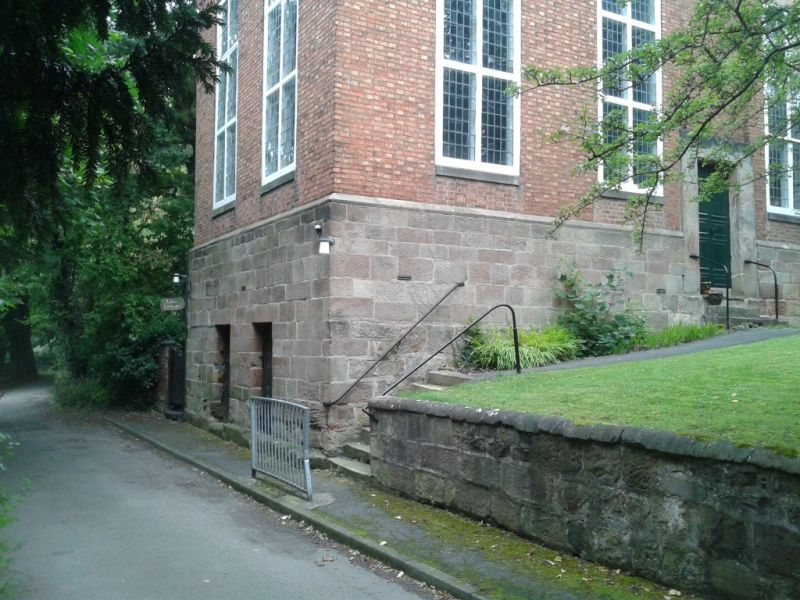 School, now schoolroom and cottage. c1720 endowed by Elizabeth
Grey of Risley Hall in her will of 1720. Red brick, on sand-
stone ashlar plinth with chamfered copings, and sandstone
dressings. Steeply pitched plain tile roof, slightly bell
canted, with rounded stone copings and plain brick kneelers to
gables, plus a stepped and dentilled brick eaves cornice.
Single storey plus garrets, and basement to west as the land
slopes away. Four bays. Main elevation has steps up to a
central doorcase which has a wide, raised, plain stone surround
with chamfered inner edge and double, panelled C18 doors. The
doorcase is set in a tall flat headed recess of similar width to
the door and of similar height to the very tall windows to
either side. There are two 2-light windows to either side, each
almost the full height of the building and with timber mullions
and double transoms, under wedge stone lintels. Fenestration is
C20 leaded lights, either fixed or casements. West gable wall
has two similar windows with a blocked garret window above and
two plank doors below in the basement. The windows have
dentilled bands over. Inside, the eastern half has been
converted into a house with an intermediate floor whilst the
west room has its original C18 school fittings, ie: oak benches
against the north, south and west walls with raised and fielded
panelled backs, and the raised and fielded oak panelled bench-
like desks along the north wall, also the master's chair against
the west wall with a fluted pilastered over-panel topped by a
stepped broken pediment and with a raised and fielded semi-
circular headed central panel. To the centre of the north wall
is the C18 fireplace with its original bolection moulding cut
back and covered by a Victorian grate but with its mantle shelf
still intact. This school was built as a pair to the Grammar
School and both buildings appear on a 1722 map housed in the
Derbyshire County Record Office, although the Derbyshire
Victoria County History states that this school was built in
1724 and the other in 1758.