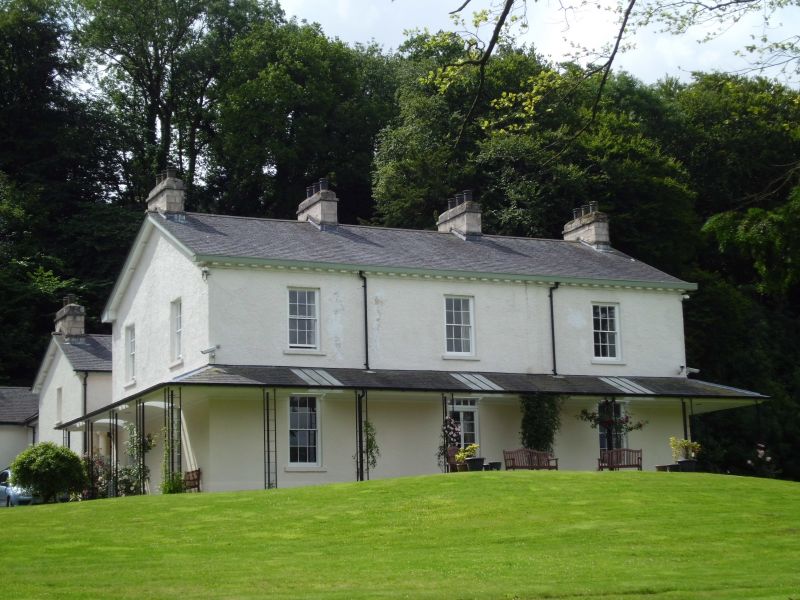 House, recently a school but now unoccupied. c.1815-20, with some
earlier fabric; altered. Painted stucco and roughcast render,
probably on limestone rubble, with Welsh slate roofs. Irregular
plan formed by 3 parallel ranges: a rectangular double-depth main
range aligned approximately east-west, built in front of the
older portion and linked to it by a shorter range and glazed
porch. Two storeys with cellars to the main range, and a long
symmetrical 3-window north front with a plinth, a verandah
carried round both sides, and wooden modillioned eaves; unhorned
sashed windows on both floors, all with exposed boxes, those at
ground floor without glazing bars and those above 12-paned;
slated verandah canopy carried on slender cast iron columns each
with a simple ladder like trellis in front of it ( forming 7 bays
to the front, 7 to the left and 6 to the right ). Four
symmetrically disposed low lateral chimney stacks with cornices.
The left side, which is the entrance front, has a central re-
entrant bridged by a glazed roof, with a glazed screen and
doorway to the porch thus formed, and an inner doorway with a
moulded architrave, cornice and consoles and door with 6 glazed
panels; the flanking gables of the front and rear ranges have
windows mostly like those at the front, but including a French
window to the main range; and projected from the rear corner to
the rear range is an outbuilding with mono-pitched roof. The
right-hand return wall has 3 gables 2:1:1 windows, the 1st and
3rd at ground floor being French windows with horizontal glazing
bars and all the others unhorned 12-pane sashes. All windows on
both floors of the front range have internal shutters. The rear
range, which may be of earlier C18 origin, has a large ridge
chimney stack offset left of centre. INTERIOR: rear range
altered, but front range retains many early C19 features
including central entrance hall containing open-well staircase
with delicate curvilinear cast-iron balusters and ramped mahogany
handrail wreathed at the foot, illuminated by oval skylight with
stained glass margin panes; original moulded plaster cornices in
3 front rooms, all different; and built-in office furnishings in
the centre of these rooms, including a broken-pedimented
bookcase, disguised iron cupboards and safes flanking the
doorway, and a semi-circular arched cast iron fireplace with
panelled surround. HISTORY: occupied by a series of wealthy land
owners until c1918, subsequently used as a school and recently
as Lakeland Training Centre.