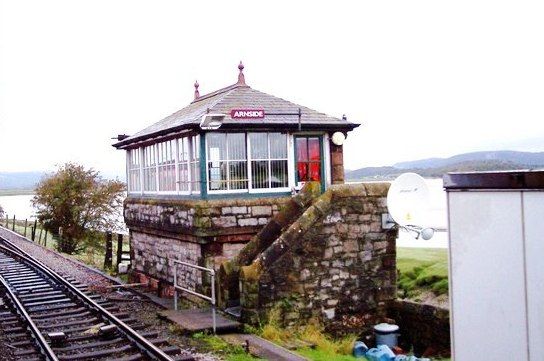 EXTERIOR: two-storey signal box built into the side of the railway embankment so that the locking room on the ground floor appears as a half basement on the trackside. The ground floor has a high, battered plinth to the height of the track bed. It is lit by square, 4-pane windows to the rear and north western end. The upper floor, forming the operating room, is slightly jettied to all sides, marked by a sandstone band. It has continuous glazing to the front and ends, divided up into windows with 4-over-4 panes divided by a single horizontal glazing bar, the front having four such windows. The windows are late C20 replacements designed to match the originals. The entrance is at the south-eastern end, reached by a flight of stone walled steps. The roof is hipped with neatly mitred hips, finished with tall terracotta pointed-ball finials. The chimney, which is to the centre of the rear wall, has been reduced in height, although it still forms an architectural feature as it projects from the rear wall face with prominent quoining, supported from the plinth by three corbels.

INTERIOR: the signal box retains a 1943 London Midland Railway lever frame of 35 levers that was installed in 1957.

From the 1840s, huts or cabins were provided for men operating railway signals. These were often located on raised platforms containing levers to operate the signals and in the early 1860s, the fully glazed signal box, initially raised high on stilts to give a good view down the line, emerged. The interlocking of signals and points, perhaps the most important single advance in rail safety, patented by John Saxby in 1856, was the final step in the evolution of railway signalling into a form recognisable today. Signal boxes were built to a great variety of different designs and sizes to meet traffic needs by signalling contractors and the railway companies themselves.

Signal box numbers peaked at around 12,000-13,000 for Great Britain just prior to the First World War and successive economies in working led to large reductions in their numbers from the 1920s onwards. British Railways inherited around 10,000 in 1948 and numbers dwindled rapidly to about 4000 by 1970. In 2012, about 750 remained in use; it was anticipated that most would be rendered redundant over the next decade.

Arnside Signal Box was built in 1897 to the standard design introduced by the Furness Railway the previous year, the design now known as the Furness Railway Type 4. It replaced an earlier box built at the time of the line's construction in 1862. Although the architectural detailing is consistent with the work of the Lancaster architectural practice of Paley and Austin, the firm which designed many of the buildings of the Furness Railway in the 1860s-80s, it is not certain that the signal box design was by the practice. The last positively identified commission for the railway company by Paley and Austin was in 1886.

Arnside Signal Box is sited just north-east of the station, just beyond the former junction with the Hincaster branch which closed in 1971. Just beyond the signal box to the north-east, the line to Barrow passes over the Kent estuary via a 50 span viaduct.

Arnside Signal Box, built 1897 for the Furness Railway is listed at Grade II for the following principal reasons:
* Architecture: possibly designed, or at least influenced by, the architectural practice of Paley and Austin, the contrasting use of limestone with red sandstone dressings is particularly effective. This is further enhanced by high quality detailing such as the mitred hips to the roof.
* Representative: as a little altered example of a Furness Railway Type 4 signal box.