Royal Garrison Church of All Saints 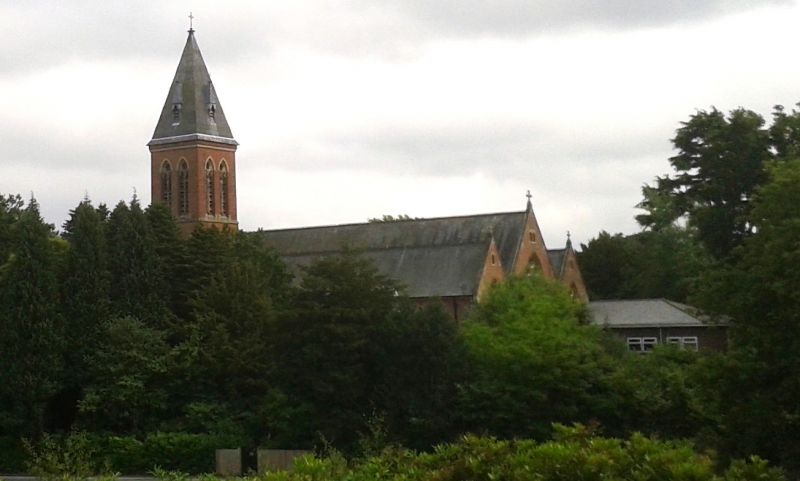 Formerly known as: Royal Garrison Church FARNBOROUGH ROAD.
Garrison church. 1863, by Philip Hardwick, drawings signed by C Russell. English bond brick with stone dressings and slate roof Decorated Gothic Revival style. PLAN: aisled nave with N and S porches at W end, S transept and opposing. N tower, NE chapel and chancel. EXTERIOR: weathered angle buttresses to coped gables on moulded kneelers with cross finials, plinth with weathered moulding, moulded cill bands, and brick dentil eaves cornice, with Geometrical Gothic tracery. E gable has 2-centre arched 5-light window with a central round window in the arch; to the left projects a low gabled vestry with paired trefoil-headed lights in the end, and to the right a low chapel with small transepts, hexagonal apsidal end and hipped roof, and paired trefoil-headed windows. N side aisle of 3 bays divided by buttresses with paired lancets, gabled dormers to the nave with triple trefoil-headed lights, and a gabled porch at the W end with moulded 2-centre arched doorway and triple trefoil-headed lights to the sides; 2-stage tower has clasping buttresses to the bottom stage, second stage with paired 2-light louvred belfry openings with colonette mullions, and a pyramidal roof with bands of green and blue slates, leaded lucarnes with finials to each side, and finial. W gable with lower aisle gables each side has a central 2-centre arched 5-light window as the E end. S side as the N, but with gabled transept instead of the tower with a 3-light window as the E end; the aisle projects through the transept into a gable with a round light containing 5 cinquefoils, and in the angle between the two gables is a porch with raking roof and small 2-centre arched doorway. In the S porch, the 1st Division British Expeditionary Force cross: a battlefield cross made of timber salvaged from Bazentin village erected in High Wood, Somme, in 1917 to commemorate Division casualties of September 1916, brought to Division HQ Aldershot in 1927 and moved to the Garrison church in 1939. INTERIOR: aisled, 5-bay nave with round piers and octagonal caps to moulded 2-centre arches, arch-braced roof on mock-hammer beam supports, cusped above moulded corbels, chancel arch on half-round responds to chancel with 2-bay roof Square font on 8 coloured marble shafts inscribed with signs of the four evangelists. HISTORY: the original garrison church for the permanent Aldershot barracks, and notable for the involvement of a national architect. This is a comparatively early instance of a garrison church, and the largest for this date, reflecting the size and consequence of the new Aldershot camp. (Childerhouse T: Military Aldershot, the first fifty years: London: 1990-; Plans and elevations: 1864-: WORK 43/733).

The entry subject to a minor enhancement on 27 June 2016.