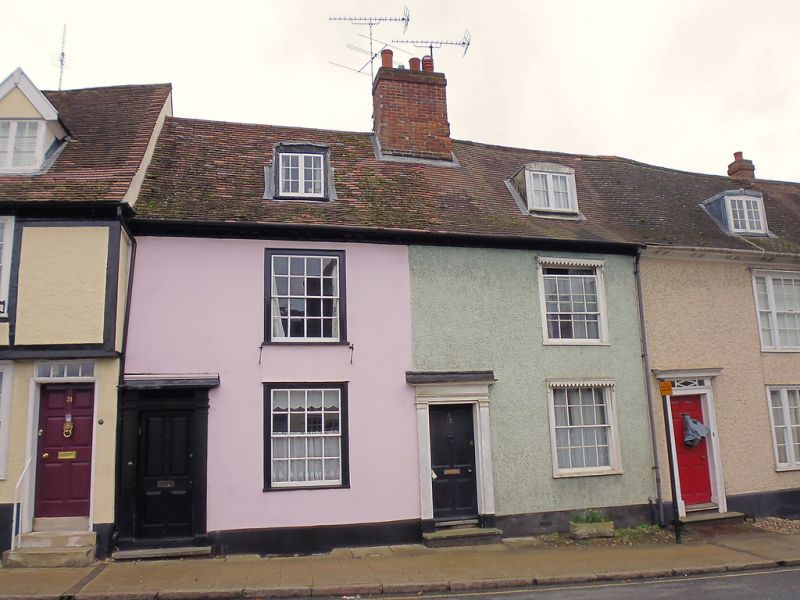 House. Late C16; refronted and divided into 2 in the early
C19. Timber-framed and rendered; plaintiled roofs. 2-cell
internal chimney plan.
EXTERIOR: 2 storeys, attics and cellar; 2 window range:
16-pane sashes to each storey, all in flush cased frames. 2
segmental-headed dormers with small-paned 2-light casement
windows. An internal chimney-stack with a plain rebuilt
rectangular red brick shaft. A 2-storey extension behind No.32
has a shallow-pitched slate roof parallel to the front roof
with a valley gutter between.
INTERIOR: a brick-and-flint-lined cellar below part of No.32
has a large supporting ceiling beam. Exposed studding in the
front upper room; the Tudor brick of the stack visible in the
attic. The upper ceilings have joists set on edge; the
original rafters are halved and pegged at the apex. On the
ground storey the main cross-beams have empty mortices for a
former partition.
No.33 has an open fireplace on the ground storey with a large
camber to the timber lintel. The bricks retain quite extensive
traces of red ochre colouring and lining. Ceiling-beams boxed
in; rafters re-used. An overlap on the upper storeys may
indicate that the house once extended further north.