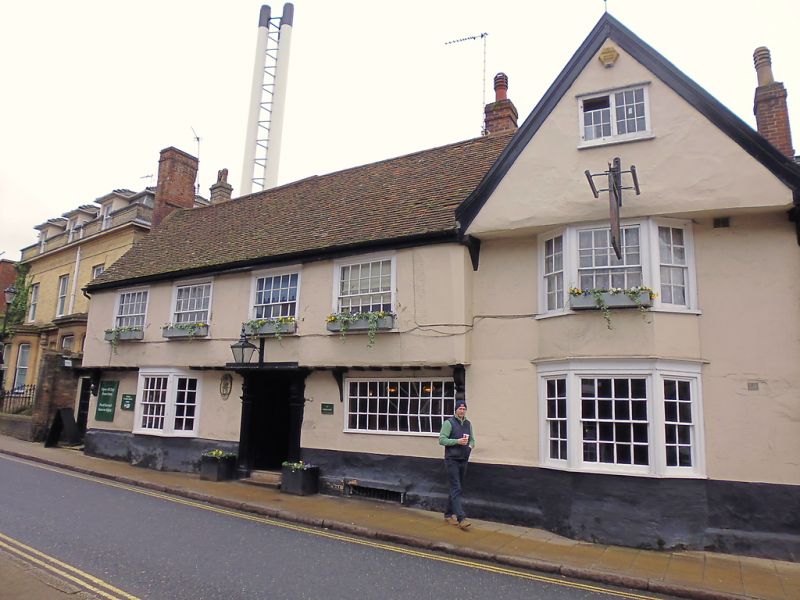 Public house. Early and later C17, C18 and early C19.
Timber-framed and rendered; plaintiled roofs. A 4-bay main
range with a parallel range behind it and a 2-bay cross-wing.
2 gable-end chimney-stacks on the south. The front of the main
range has a jetty with a wide overhang supported on ornate
console brackets.
EXTERIOR: 2 storeys, attics and cellars; 4 window range:
20-pane sashes in flush cased frames with projecting timber
sills. The ground storey has a 3-light canted bay window on
the left and a fixed small-pane former shop window on the
right with an entrance door between: doorcase with
egg-and-dart and bead-and-reel ornament and a moulded cornice
supported on console brackets.
The rear range is 3-storey with a 3-window range to each
storey: 16-pane sashes in flush cased frames, the centre
window on the top storey blocked. The cross-wing has an
overhang at eaves level with plain supporting brackets; a
canted bay rising through 2 storeys has a 3-light small-paned
sash window to ground and 1st storeys. An old 2-light latticed
casement window with pintle hinges the attic.
INTERIOR: the jettied range has the main cross-beams of the
ground-storey ceiling exposed, not all of the same scantling,
chamfered, with step stops; the partition walls have been
removed. On the upper storey, one long room with a boxed-in
main beam. The exposed upper timbers of the rear range appear
older than the front; good studding to the inner wall and
ovolo-moulded main beams.
The cross-wing has boxed-in beams and a former end
chimney-stack of C17 brick with an ovolo-moulded timber
lintel. Behind the stack is a 3-bay C18 extension in brick and
flint, formerly with an upper storey, but now open to collar
level: clasped purlin roof. Joined to it on the west by a C20
link is a late C18/early C19 former stable block, facing into
the rear yard. Walls of flint, brick and stone, painted on the
ground storey, rendered above. The original mansard roof has
been raised along the south side in a shallow pitch. 3 large
16-pane sash windows to the upper storey in plain reveals; one
20-pane sash to the ground storey.
(BOE: Pevsner N: Radcliffe E: Suffolk: London: 1974-: 151).