Church of St Mary and Attached Wall and Railings 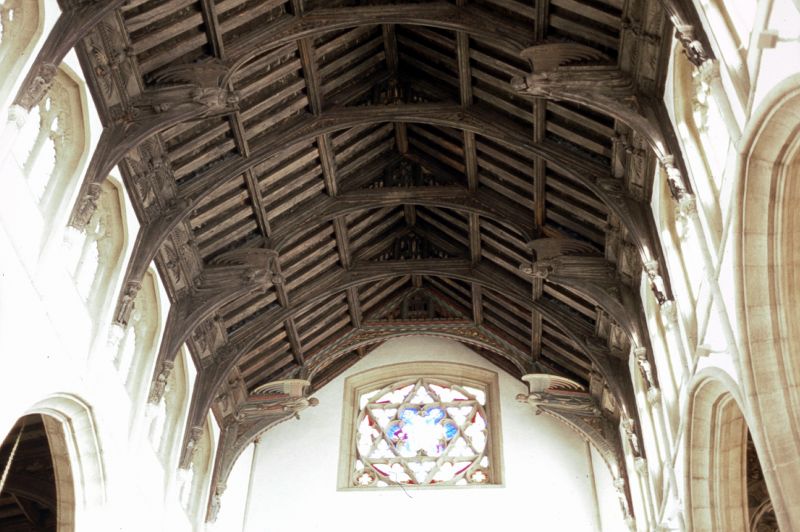 Parish church. C14 and C15, on an earlier site. In flint and
stone, ashlar-faced on the south and west; lead-covered roofs.
PLAN: nave and chancel, north and south aisles, north-west
tower.

EXTERIOR: embattled parapets to nave and aisles. The south
aisle, in fourteen bays, has 3-light transomed and traceried windows
with 2-centred arches; stepped buttresses between the windows
and a diagonal buttress at the south-west angle. The last four
bays to the east were an extension forming a chantry chapel
given by Jankyn Smith between 1463 and 1473. He also gave the
slightly earlier extension to the north aisle to form a
chapel, and the sanctuary.
The west front is similar to that of the Cathedral of St
James, Angel Hill (qv) with crocketed finials, a stepped gable
to the nave and a 5-light transomed window; 4-light transomed
windows to the 2 aisles. An empty canopied niche on each side
of the west door. A stepped east gable to the nave with two
rood-stair turrets which have tall crocketed spires and
finials. The battlemented C14 tower is flint-faced in three stages
with stone string-courses in between. Stepped angle
buttresses, stone-faced, with flint panels.
The south side, and part of the east and west sides, project
into the north aisle, and this reduces the number of windows.
A 3-light traceried window to each face of the top stage;
2-light windows to the middle stage, and on the west side two
long narrow 2-light transomed windows to the 1st stage.
Re-used C14 north doorway within the Nottyngham porch. This
ornate porch, built in memory of John Nottyngham and his wife,
dates from the 1440s and is stone-faced, with pinnacles, a
crocketed gable and three niches above the entrance. The stone
vaulted ceiling is panelled with a wheel of blank arches and
an open pendant as the hub.
A short stretch of the precinct wall of the Abbey of St Edmund
adjoins the north-west angle buttress of the tower: the stone
quoins of the buttress stop near the top of the wall, which
rises to approx. 4 metres in part, dropping to between 1 and 2
metres. A later doorway has been cut through it.
Attached to the north-west corner of the west front is a 60m
stretch of C19 cast-iron railings approx 1m high, which divide
the churchyard from Crown Street. Set on a low stone plinth.
The railings, which have square shafts set diagonally, topped
by fleur-de-lys finials, are divided into short bays by main
verticals with iron-twist to the shafts and 4-way fleur-de-lys
finials, and include a small gate. A stretch in similar style
and materials 74m long is attached to the south-west corner of
the west front and runs down the south side of the church
along Honey Hill. This includes two pairs of double gates.

INTERIOR: nave arcades in ten bays with very tall shafted
arches. Small capitals on thin triple shafts to the arch
openings only. Impressive nave roof in which hammer-beam
trusses alternate with moulded arched-brace trusses.
Large recumbent angel figures to the hammer-beams, thought to
represent the procession at the Coronation of the Virgin.
Carved spandrels to the arched braces; tracery to the
collar braces; wall plates with demi-angels; wall posts
resting on corbels with carved figures. Above the chancel arch
a window inserted by Cottingham in the 1840s has 6-pointed
star tracery. The C14 wagon roof in the chancel has cusped
panels with carved bosses and a painted cornice with angels
carrying scrolls.
The former Lady Chapel in the south aisle was converted to a
chantry chapel by John Baret (d.1467); it has a boarded and
painted ceiling with panels, each bearing his motto 'Grace Me
Governe'. Against the south wall, his table tomb with a
cadaver monument lying upon it.