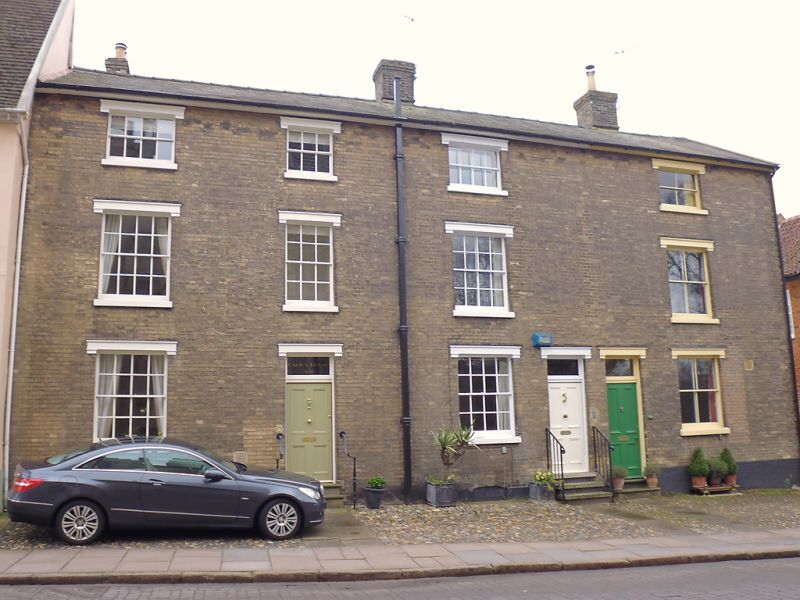 A terrace of 3 houses. C16 and C17 core; early to mid C19
heightening and refronting. Timber-framed core; white brick
front; slate roofs.
EXTERIOR: 3 storeys and cellars. 4 window range: 16-pane
sashes to the ground and 1st storeys of Nos 41 and 42 and
8-pane sashes to the top storey; No.43 has sashes with a
single vertical glazing-bar. The doors and windows all have
stucco cornices and stub brackets. 4-panelled doors in plain
reveals with plain rectangular fanlights.
A small, older 2-storey part of the building projects at the
rear of No.41. This has a plaintiled roof and was probably
originally jettied. 12-pane sash windows in flush cased frames
to the upper storey and an Edwardian canted bay to the ground
storey. There is also a C19 single-storey rear wing in brick
and weatherboarding.
INTERIOR: cellar below the front of No.41 has walling in
flint, brick and re-used stone with a timber ceiling. Remains
of timber-framing on the ground and 1st storeys: a chamfered
main beam in the front room and a very large cross-beam to the
rear room with cut-off stops. 2 corner fireplaces have been
introduced, that in the rear room with a fine C16 roll-moulded
lintel, probably moved from elsewhere in the building. On the
upper storey, a section of exposed studding.
Stair with turned balusters, closed string, moulded handrails
and square newels. There are several good early C19 raised
grates. No.42 has the main C16 cross-beams of the ceiling
exposed, with a double roll-moulding which is also carried
across the beam in the south wall. The room is very deep and
may have been jettied along the street frontage. As part of
the C19 remodelling of the interior it was divided into 2 by
an inserted chimney-stack.
On the 1st storey a ledge marks the line of the earlier
wallplate. A C17 one-and-a-half-storey rear wing is divided
lengthwise between Nos 42 and 43. No.43 has a C19 internal
layout corresponding to that of No.42, but no evidence of
earlier remains. It stands on an older site and has a
particularly fine cellar, lined with stone blocks; an archway
running below the pavement is faced with Tudor brick.