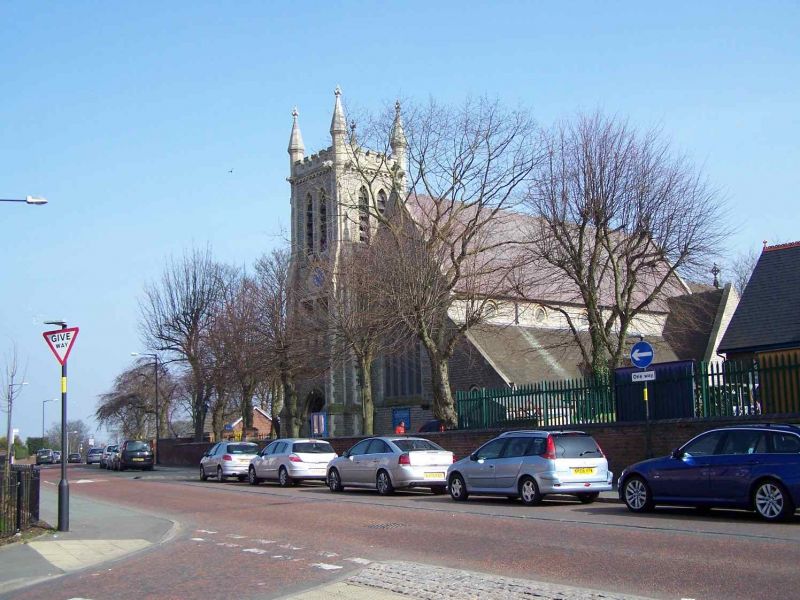 Church. Opened 1870, with tower completed 1882, by Naden of Birmingham.
Limestone rubble with Bath stone dressings and tile roofs. Comprises a
nave with clerestory, north and south aisles, a tower at the west end of
the north aisle, transepts, and a lower chancel with north vestry and
south organ chamber. The three-stage tower has angle buttresses, an
embattled parapet, and corner pinnacles. The bell openings are each of
two trefoiled lancent lights. Above the openings of the middle stage is
a clock face. The west doorway at the base of the tower is moulded with
pointed arch. The west window of the nave is of five lights with geometric
tracery. The aisles are both of three bays and have windows of three tre-
foiled lights under depressed 2-centred heads. The south aisle has a gabled
porch between the first and second bays. The clerestory has cusped round
openings. The transepts each have a 3-light window under a pointed head
with geometric tracery. The east window is similar, but of five lights.
Interior: the nave arcades are of four bays on the north and five on the
south. The eastern bay on each side opens into a transept and is divided
from the rest of the arcade by a pier with attached columns and two carved
heads. The pointed arches are carried on round columns with foliated capitals.
The roof has trusses supported on stone corbels, with king-posts rising
from arch-braced collars. The pointed chancel arch is moulded and has
shafts as responds, carried on corbels. The chancel windows contain late
C19 stained glass. (VCH, Staffs, Vol 7, p 237).