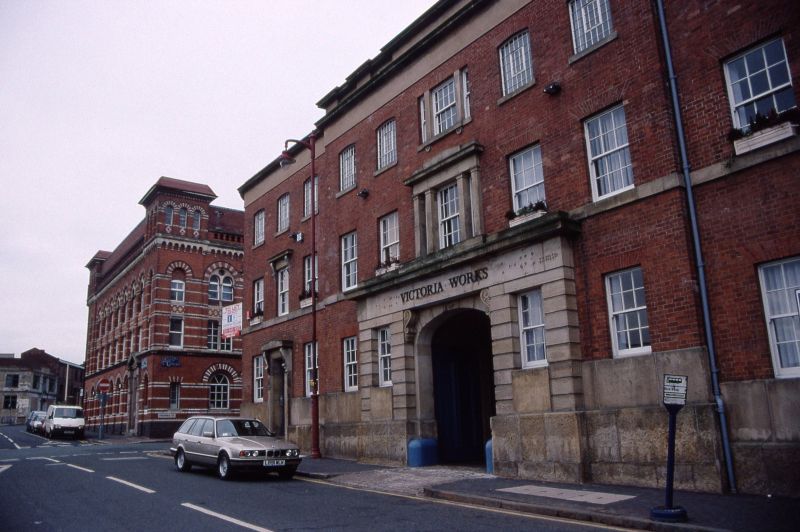 Factory, 1838-45, c1850 and 1887. Red brick with ashlar and stucco dressings.
Main street front has an 11 bay, 3 storey facade with a deep ashlar plinth, and
first floor ashlar band, plus a C20 brick coped parapet. Central archway with
projecting rusticated surround, and segmental ashlar archway, flanked by sashes,
and topped by entablature. Either side pairs of sashes, with beyond single
doorways in ashlar surrounds with-bracketed triangular hoods, beyond again are
single sashes. Above central tripartite sash in pilaster surround topped with
entablature, with either side 3 sashes, and beyond single sashes with bracketed
ashlar hoods, and beyond again single sashes. Above again a central tripartite
casement window with ashlar mullions, beyond either side 5 casements all with
concrete lintels. To the right a 4 metre high brick wall with inset Tuscan
pilasters and an ashlar blocking course. At the centre a medallion terracotta
relief of Queen Victoria flanked by palm fronds and set within an attic storey
itself flanked by flattened volutes. The attic storey conceals a small building
that stands at right angles behind the wall and through whose roof a mighty
flagstaff soars. This wall continues around the corner and along Vittoria
Street. Beyond this is a 3 storey 2 bay, hipped roof building with irregular
fenestration. Beyond again is an eight bay, 3 storey building with dentilated
eaves. Central segmental archway, flanked by 3 sashes to the left, and 2 sashes
to the right with a doorway beyond, above 8 irregular windows, with 8 small
irregular windows above. Frederick Street front has a 13 bay front similarly
fenestrated to the main front with beyond a 10 bay building in a plainer style
with ground and first floor cill bands. The ground floor windows are mostly
glazing bar casements with above iron frame windows with segment heads. The
inner courtyard has an irregular 27 bay rear wing, 3 storey with irregular
fenestration, mostly with iron frame windows with segment heads. This factory
complex was built for Joseph Gillort to produce steel pen nibs by his new
pressing method. The building is reputed to have been partly designed by
Charles Edge of Birmingham. The building is listed because of its importance in
the industrial development of Birmingham and because of the international importance
of this first mass production of pen nibs.