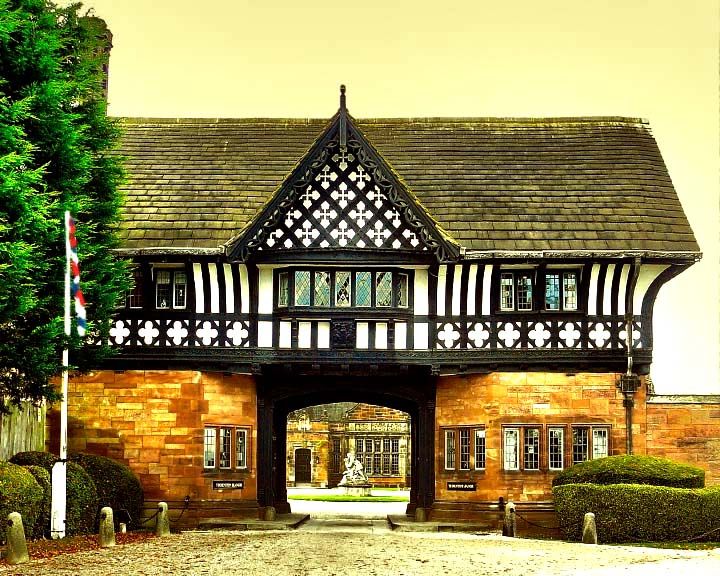 HISTORY: William Hesketh Lever was born in 1851 in Bolton, Lancashire. After training in his father's grocery business from the age of 16 he was made a junior partner in 1872, and a year later he expanded the business to a second premises in Wigan. From these twin bases Lever further expanded the company's activities into manufacturing soap, first at Warrington and eventually at Port Sunlight. By this time the company had become 'Lever Brothers', established with his brother James (although William was always the lead partner). The company went on to possess factories and mills around the world including the Congo, as Lever expanded the business into the production and processing of raw materials, and eventually diversified into other areas. Lever Brothers became one of the largest multinational companies in the world during the late C19/early C20, and is still in operation today as Unilever.

William Lever was a Liberal MP, social reformer, and a pioneer of good worker-employee relations. He introduced the 8 hour working day, and provided a pay policy greater than any other company in the country. In 1905 he also provided pensions for his staff (3 years before they were introduced by the government in 1908). Lever Brothers was also one of the first companies to employ a full-time safety inspector and company doctor, and to provide respirators and a rota system for workers working in dusty conditions. Decades before it became a legal requirement Lever Brothers had introduced alarms and sprinklers in all their departments and had their own voluntary ambulance and fire brigade. The staff were also taken on day and weekend trips in Britain and in Europe.
William Lever built Port Sunlight model village for his workers, which included a planned landscape of houses with gardens, allotments, large open spaces and parks (ten years before Ebenezer Howard's plans for a Garden City), shops, a hospital, school, post office, sports facilities, church, dining halls, a public house, the Lady Lever art gallery, and a library. The children of Port Sunlight and Lever's junior staff were required to attend school and devote time to education (paid for by Lever Brothers) including languages, science, engineering, accountancy, maths and English literature, even though by law school was only compulsory up to the age of 10.

Lever was created a Baronet in 1911. In 1917 he was made a Lord and took the title of Lord Lever of Bolton-le-Moors. Finally in 1922 he was created Viscount Leverhulme (adding the surname of his wife Elizabeth Hulme who had died in 1913). He died at The Hill (his London home) on the 7th May 1925 shortly after returning from a world tour and inspection of his business interests.

Thornton Manor is believed to have been constructed in the c.1840s/50s, but was not lived in until 1863 when it was bought by the Forwood family. William Lever rented it in 1888 when it was still a relatively modest Victorian villa, as it was located close to his business at Port Sunlight. He bought the manor in 1891 and immediately started expanding and remodelling it as his largest and main residence (works that went on for the next 25 years). Thornton Manor formed an important part of the business of Lever Brothers as well as a family home, as Lever often worked at the house, held meetings there, and entertained staff at dinners, parties, and garden parties/fairs. Thornton Manor was officially given over to his son in 1919, although it remained as Lever's principal residence until his death.
The gatehouse was built in 1910 to the designs of James Lomax Simpson, who was a pupil of Grayson & Ould. Edward Ould was the architect of Wightwick Manor and was an expert on local black and white vernacular. Further timber framed buildings were planned around the courtyard and gatehouse, but the outbreak of WWI and the death of Lever's wife put an end to these plans.

The last Lord Leverhulme died in 2000 and the house, cottages, stabling, gardens and 125 acres of parkland were sold, although the remainder of the Thornton Manor Estate, including the village of Thornton Hough, was retained by the Leverhulme family. The gatehouse is now used as holiday accommodation.

REASONS FOR DESIGNATION: The gatehouse to Thornton Manor is designated at grade II* for the following principal reasons:

* It is an integral component of Viscount Leverhulme's extensive late C19/early C20 country estate of Thornton Manor, which retains its main house, stable and garage court, associated lodge and cottages, and gardens
* It was designed by the nationally recognised architect James Lomax Simpson, one of the principal architects behind Port Sunlight model village, and a pupil of Grayson & Ould
* It is an excellent example of the Vernacular Revival style with a striking and elaborate design, which forms a highly imposing entrance to the main house and front courtyard
* The level of decorative detailing to the external elevations is extremely high with the use of decorative timber framing to the first floor, carved timber bressumers, double chamfered mullion windows, an oriel window, decorative moulded lead rainwater goods, and a carved relief of Viscount Leverhulme's unique coat of arms
* The materials and craftsmanship employed are of a very high quality
* It is well preserved both externally and internally, and retains original interior features including panelled doors and walls, built-in cupboards, and porter's kiosk
* It shares an extremely strong visual and functional relationship with the main house, and also has additional group value with other listed buildings on the estate