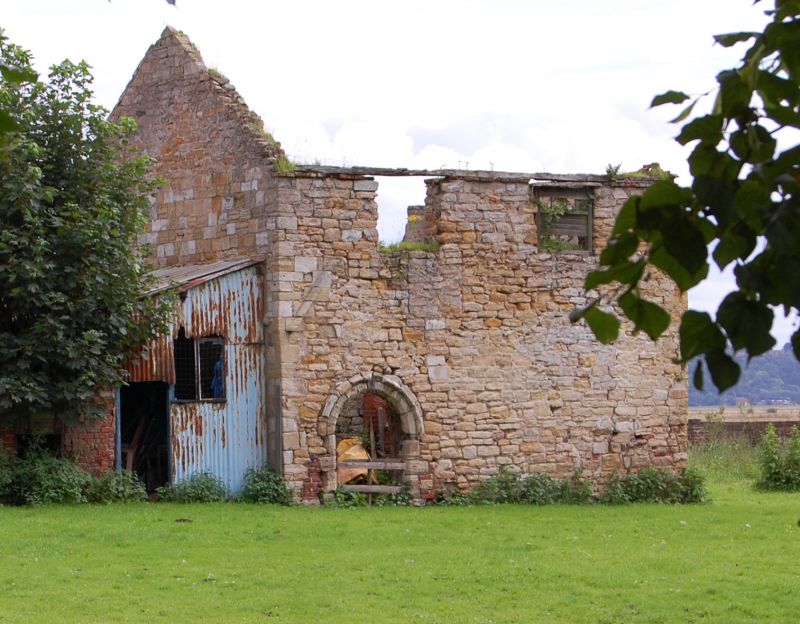 Outbuilding, probably part of former house. Medieval, probably C13, with
reset C12 arch; later alterations, including insertion of south gable end
and insertion or replacement of first floor. Roof removed c1970. Limestone
ashlar and coursed rubble with south gable end of red brick. Rectangular on
plan, single room with original entrance to east. Approximately 6 metres
north-south by 4 metres east-west. 2 storeys. West side: 2 first-floor
openings. Round-headed chamfered arch to left with plain hoodmould.
Section of gable drip course above. Blocked square-headed opening above
right with first-floor window above, and smaller first-floor window to
right; both windows beneath fragmentary wall plate. East side: wall
seriously damaged, with outer face collapsed to left. Inserted board door
to right of centre. First floor has central door with brick blocking below,
flanked by window to right and smaller window to left. North gable end
(partly obscured at time of resurvey) has small blocked chamfered square-
headed ground-floor opening to right, moulded string course at first-floor
level. South gable end is inserted between side walls: ground floor
obscured at time of resurvey; first floor has small blocked square-headed
opening, fragmentary opening to head of gable. Eaves and gable verges
partly ruinous. Roof missing. Interior. North side has pair of blocked
openings, apparently doors, beneath oak lintels; wide blocked opening with
ashlar jambs to first floor. Ashlar surround to blocked opening in west
wall. Stands alongside the former east bank of the old River Don, navigable
here in the Middle Ages. Marked as "Ware House" on OS 1:2,500 map, but
probably part of a former domestic complex perhaps that built by John le
Franceys, rector of Adlingfleet, who in the mid C13 demolished Whitgift
Church and, "scattering the stones of the sanctuary, caused them to be
carried away to Adlingfleet and built a chamber (camerum) for himself".
Such an origin might explain the C12 doorway. A remarkable survival: one of
Humberside's few standing medieval secular buildings, and the only one in
the low-lying Marshland region of the lower Trent and Ouse valleys.
Suffering from serious neglect; partially ruinous and in immediate danger of
further collapse at time of resurvey (April 1987). Masonry removed from the
building has been used for a wall extending from the south-east corner
eastwards to the side of Garthorpe Road. J Raine, The Fabric Rolls of York
Minster, Surtees Society, vol 35, 1859, p 236; W Richardson, Some Useful
Consumers of Waste: History in two Marshland Parishes, Adlingfleet and
Whitgift, 1981, pp 44.