A Grade II* Listed Building in Whitney-on-Wye, County of Herefordshire 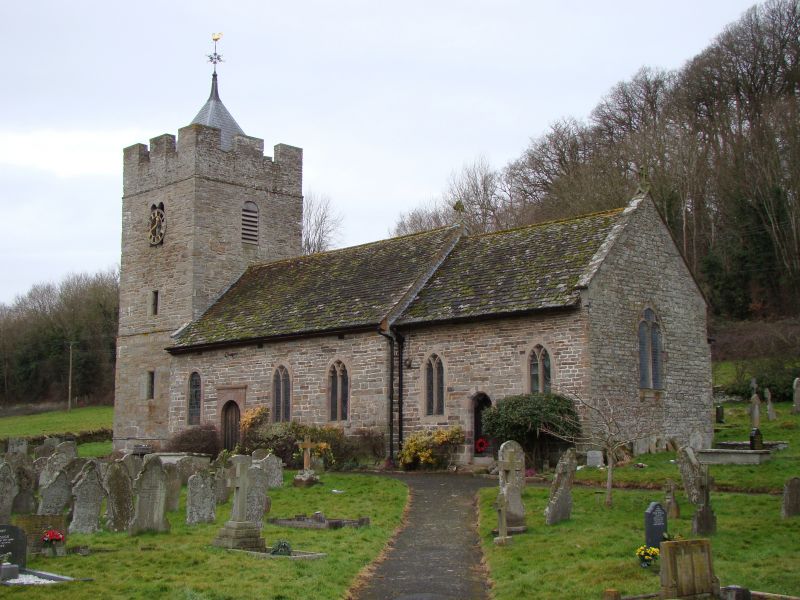 WHITNEY ON WYE CP WHITNEY ON WYE
SO 24 NE
5/115 Church of St Peter
and St Paul
16.10.67
- II*
Parish church. Possible C12 origins, altered C14, largely rebuilt in
1740 (after partial destruction by flood water in 1720) and altered in
1903. Part dressed rubble with ashlar dressings, part ashlar; stone-tiled
roofs laid in diminishing courses with decorative ridge tiles, gable-end
parapet to chancel and cross finials at gable ends. West tower, three-
bay nave with south doorway and two-bay chancel with north vestry.
West tower: partly rebuilt in 1903. Three stages with strings (except
beneath belfry stage). Lower stage has chamfered rectangular lights with
metal bars to the north and south and a square-headed west doorway. The
second stage has similar windows to north, south and west elevations. The
belfry stage has round-arched louvred bell chamfer openings to the east and
west, a rectangular opening on the north side and a 2-light opening with
round-arched lights partly concealed behind a clockface on the south side.
Above is a tall embattled parapet, pyramidal roof and weathervane.
Nave: the north elevation has a raking buttress between two 2-light windows
in the easternmost and central bays and at the western end is a rectangular
light with a cusped head. The south elevation has two 2-light windows in
the easternmost and central bays and, at the western end, is a large round-
headed window with its original Georgian leaded glass. To the east of this
window is the south doorway. This has a moulded cornice, banded rustication
and round-headed archway in pink sandstone ashlar and its original studded
and battened door. Chancel: some medieval walling survives on the north
and east sides. The 2-light east window is late C14 and probably in situ.
In the south elevation are two 2-light windows flanking a round-headed chamfered
uoorway. (This doorway is blocked and contains a timber First World War memorial).
North vestry is gabled and has a 2-light north end window and a chamfered round-
headed east doorway. Interior: there is a round-headed chancel arch. In the
west wall of the nave is a C16 rectangular light. Both nave and chancel have
wagon roofs. The chancel has an early C17 reredos which has a four-bay
overmantel with three terminal figure reliefs, two enriched arcaded panels
and a frieze carved with dolphins and three shields. One shield is dated 1629.
The reredos is flanked by reused C17 and C19 panelling. The altar rails are
of 1740 date and have turned balusters and a moulded handrail. The font has
a hemispherical bowl of probable C12 date, on a C14 moulded octagonal base
and square plinth with spur ornaments. The ornately carved four-sided timber
pulpit is an early C20 reproduction in the Jacobean style. The dado in the
chancel and nave is made from reused C17 panelling which is also incorporated
into the backs of the pews and includes a cupboard door dated 1704. There are
also some C16 bench ends with shaped tops and elbow rests incorporated in the
pews. The west gallery is of circa 1740 date and has turned balusters and a
moulded handrail, and also a dogleg staircase with square newels and shaped
finials at its north side. Memorials: the south chancel wall has a late C17
memorial to Thomas Williams, died 1698, with a segmental pediment, achieve-
ment of arms, Ionic columns and garlanded base. There is also a memorial to
Joan Spencer, died 1826, and numerous memorials to members of the Dew family
of mid-C19 and later dates. In the nave is a memorial to Ann Powell, died
1823, with a swagged urn relief and a memorial to Alice Dew, died 1855, with
lily-of-the-valley relief garlands. (RCHM, III, p 203, item 1; BoE, p 320).