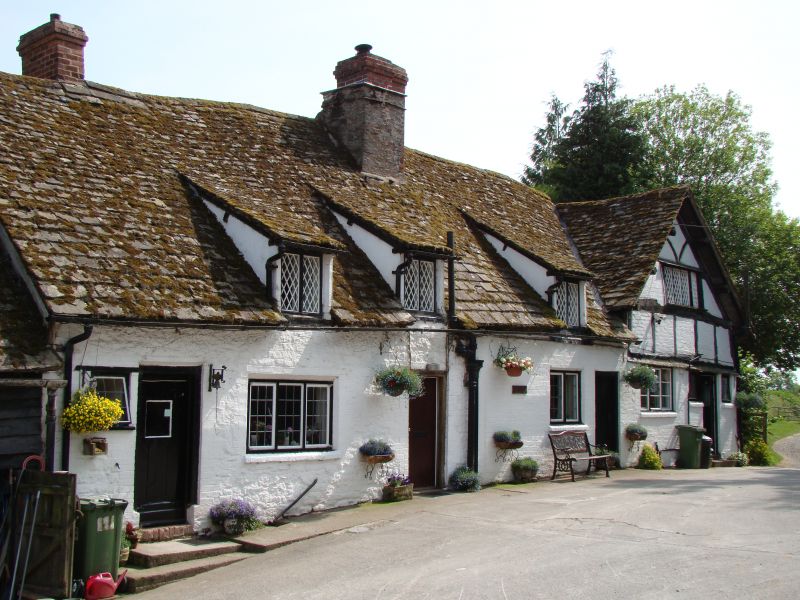 BRILLEY CP -
SO 25 SE
2/4 Fernhall Farmhouse
and adjoining cowhouse
GV II
Farmhouse, once divided into three tenements, and adjoining cowhouse.
Late C14/early C15, altered probably C17, late C18, mid-C19 and restored
late C20. Timber-framed with painted brick infill on rubble base, painted
brick and rubble replacement walling and refacing with stone-tiled roof laid
in diminishing courses and large rubble ridge stack (part rebuilt in brick);
also brick stack at north-east end. Cruck hall-house of two framed bays
aligned north-east/south-west with cross-wings originally at both ends.
South-west wing has an external rubble chimney adjoining its south elevation.
The main roof has now been continued over the north-east cross-wing and the
hall had a large central chimney and ceiling inserted in C17. Single storey
and attic with dormers. Framing: three panels from sill to wall-plate (only
upper row of panels visible to front); cross-wing has collar and tie-beam
trusses with struts with V-struts above the collar (swept V-strut to front).
North-west front elevation: main range has a 3-light, a 2-light and a single-
light ground floor leaded casement, three raking-top dormers with 2-light
latticed casements and three doors, two of them being partly glazed. The
cross-wing gable end has a ground floor 3-light casement, a 4-light attic
window with latticed casements and a plank weathering and a partly-glazed
door with flanking square leaded lights. There is a lean-to outshut with a
catslide roof to the rear north-east end. Interior: hall is recorded to
retain its central cruck truss which has a collar and three cusped openings
above the collar; there were also cusped braces below the collar. The end
trusses are also said to survive and there is a large fireplace in the south-
west bay. Cowhouse adjoins north-east end. C17. Timber-framed and weather-.
boarded with stone-tiled roof laid in diminishing courses. Three framed bays.
Single storey. There are two doors and a large opening in the north-west
elevation. Interior: wall-framing has two panels from sill to wall-plate and
short straight braces across the lower corners. The roof has a collar and tie-
beam truss with three struts and a V-strut above the collar at the west end,
and two intermediate and a south-west end king-post truss; two tiers of trenched
purlins. (RCHM, III, p 24, item 4; BoE, p 86: Alcock, N W: CBA Cruck Catalogue,
1981).