Farmbuildings to N of Park Farmhouse 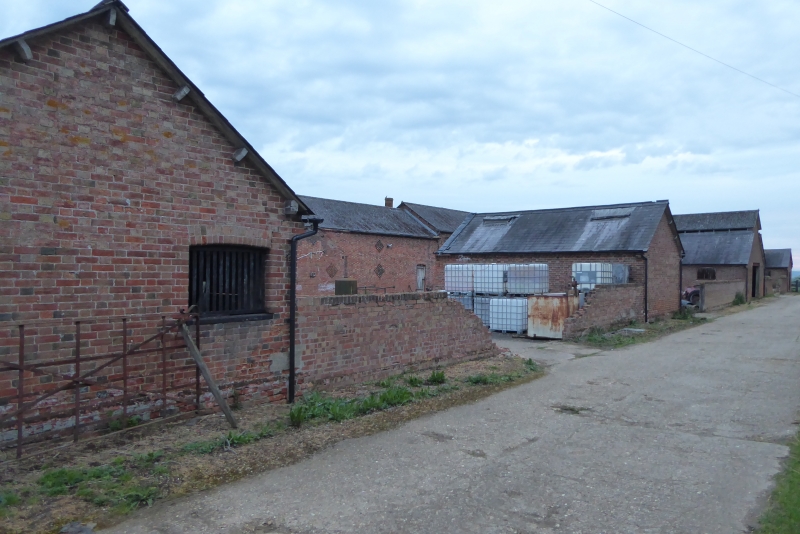 Planned farmstead to the north of Park Farmhouse. c.1860 for the 7th Duke of Bedford. Red brick and gabled Welsh slate roofs.
PLAN: Around 3 yards, with long north range consisting of single-storey sheds at either end opening into yards, a 2-storey straw or haybarn, a 3-storey threshing barn wider than the other buildings with a porch for steam engine, and a cart shed with granary above.
EXTERIORS: Segmental arches over openings including plank doors, cast-iron casement windows and hit-and-miss ventilator windows. Western yard: 3 loose boxes with 3 doors at south end of west range with 5-bay shelter shed supported on 4 cast-iron pillars to north and a livestock shed with a central door and window either side to rear. Middle yard: western buildings comprise open shed with central door to south and 4 bay shelter shed supported by 3 cast-iron pillars to north. The building to the east is a tall open cow shed/piggery with side central door to west and 4 narrow doors to the east for pigs and a long clerestory for ventilation along the ridge; eastern yard is enclosed by 6-bay shelter sheds and loose boxes to north. Original hit-and-miss ventilation windows and sliding doors remain throughout. Northern range: the central 3-storey barn is the tallest and widest part of the group, and the porch to the north is an unusual design, open to east and west and roofed with brick vaulting through the centre of which rises a chimney. The most likely explanation is that it housed a portable steam engine that could be towed in to stand under the chimney. There is gearing for belting in the porch and through into the barn. To the north of the porch is a small coal house and pump room beyond. To the east is a 6-bay outward facing cart shed with lozenge ventilators and casement windows to granary supported on 5 cast iron pillars and a staircase with cast-iron stippled treads, at the east end tucked in beside the back of the narrower sheds southward opening sheds. Under the stairs is an earth closet. To the west is the straw barn with wide opening below and sliding hatch open into loft above.
INTERIOR: Not fully inspected. Roofs boarded behind slates and supported on king post trusses.
HISTORY: The Bedfordshire estates of the Russell family form one of the most extensive in the county. They controlled almost the entire parishes of Houghton Conquest, Ridgmont, Lidlington, Eversholt, Millbrook, Marston Moretaine, Steppingly, Stevington, all in the vicinity of Woburn. Their names are firmly linked with farm improvement and complete farmstead and villages were rebuilt. After a short period of neglect Francis, the 7th Duke inherited in 1839 and a further period of estate investment began with wood and thatched buildings being replaced by brick and slate or tile. The late 1840s and 1850s were a period of great building activity to "satisfy the requirements and take advantage of the recent improvements in agriculture and to enable tenants to meet the competition to which free trade in corn and other agricultural produce has given rise, and through building chiefly in brick to protect against incendiarism and to ensure the durability of buildings." (1853, Bedfordshire Record Office R5/869/1). Expenditure of permanent improvements reached a peak in the 1850s with o17,000 being spent in several years. It is clear that this scale of investment never produced the hoped-for returns (Duke of Bedford, The Storey of a Great Estate, 1897) but it did result in some of the finest farm buildings in England. The buildings at Steppingly are described as 'new' in the 1860 Annual Report (B.R.O. R5/869/2). The porch arrangement for the steam engine is unusual and perhaps represents a transitional type between steam engine houses for fixed steam engines, and the smaller, fully portable types.
SOURCE: Wade Martins, Susanna. The English Model Farm: Building the Agricultural Ideal, 1700-1914. Windgather Press, 2002.

Group value with the contemporary Jacobean-style Park Farmhouse (q.v.) to the south that was designed with the group.